Nevertheless, the trading volume has fallen significantly in recent days and amounted to $30 billion yesterday. This is 30% lower than a week ago.

The past week was full of various predictions. The most popular was the Bitcoin price forecast from JP Morgan bank. Analysts of this company believe that the objective price of the first cryptocurrency is $35,000. First of all, due to the fact that this asset is subject to high volatility and is poorly attractive for investment. Moreover, they have doubts about hitting the price of $100,000 and consider the entry point to be very bad at the current moment.

Famous investor Peter Thiel also believes the price of Bitcoin is too high. According to him, this was a reaction to high inflation and the policy of active money printing. He also says that buying Bitcoin is now an extremely risky deal and such a high price speaks of an impending crisis.

At the same time, the regulation of cryptocurrency continues to go in full swing. This time, the US Treasury Department announced the threat from stablecoins. The regulator wants to significantly tighten the legal requirements for these currencies and the companies that issue them. Moreover, they require the issuers of stablecoins to be equated to depository institutions with compulsory deposit insurance. A separate paragraph of this document says that issuers of stablecoins should not be affiliated with commercial organizations. Most likely, this applies to Tether and Bitfinex.

Very important news came out quietly from CME. This exchange announced that it will launch micro-futures on Ethereum. Trading will begin in a month, on December 6th. The company is launching this derivative due to the high demand for Ethereum futures, which were launched in February 2021st. At the same time, we want to remind you that after the launch of micro-futures for Bitcoin in May 2021, the crypto market collapsed by 50% in 2 weeks. Thus, it is important to be especially careful during this time.

Positive news for Ethereum came from the Bakkt exchange. This company announced support for this cryptocurrency on their platforms due to high demand. Bakkt partners will be able to use Ethereum in all of their services, just like Bitcoin.

The influx of large venture capital investments into the crypto industry continues. The largest venture round was raised by the FTX exchange. The company was able to raise $420 million from nearly 70 investors at a $25 billion valuation. Recall that the same company raised a record financing this July — $900 million. FTX plans to use the new capital to expand its operations towards NFT and video games.

These events did not significantly affect the price of Bitcoin last week. Let’s take a look at its chart and try to predict its further movement: 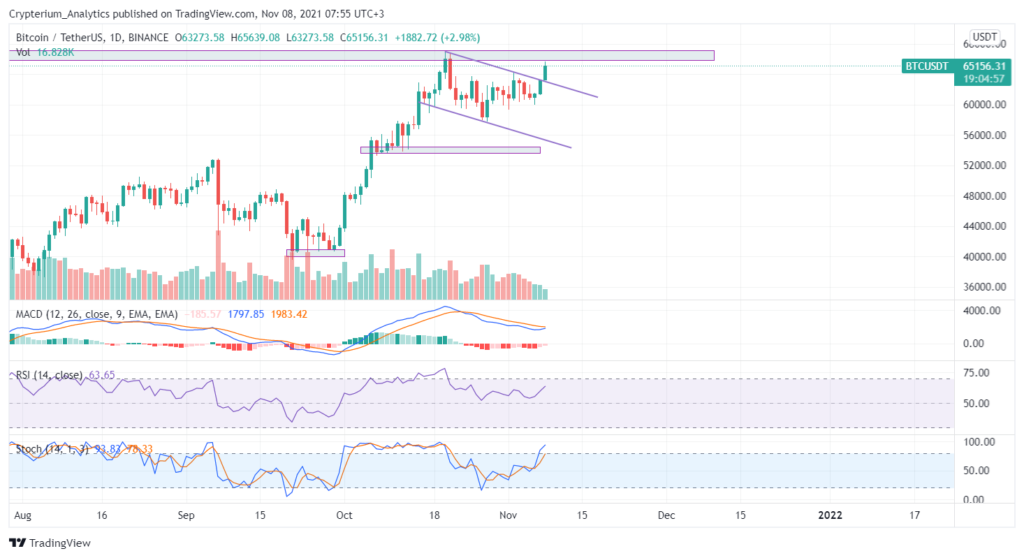 Altcoins reacted poorly to this growth and practically did not change in price. The exceptions are XRP and Ethereum, which have grown even stronger than Bitcoin. Ethereum has once again updated its ATH. As a result, Bitcoin’s dominance stopped falling and began to rise. Over the past two days, it has grown from 42% to 43.5%. All this suggests that public attention is now shifting to the first cryptocurrency.