The past week has become calm for the cryptocurrency market. The price of Bitcoin has not changed much and is still around $30,000. Market participants continue to bounce back from the Terra crash and large liquidations. At the same time, many altcoins showed negative dynamics over the week.

The main topic of the past week was the consequences of the collapse of the Terra project and its algorithmic stablecoin UST. The CEO of the project proposed to create a fork of the Terra blockchain without an algorithmic stablecoin and distribute the airdrop to Luna and UST holders. Voting will last a week and its results will be known on May 25. It is most likely that this proposal will be accepted, since the majority of participants vote in its favor.

The losses of some investors who supported the Terra project became known. Binance CEO discloses investment in Luna. Before the collapse, his company owned 15 million coins, which was about $1.5 billion at the beginning of May. The large crypto fund Hashed  also suffered a significant loss of $3.5 billion, and Delphi Digital lost 13% of its total capital. In addition, the Avalanche Foundation, a blockchain project fund, reported a loss of $60 million.

A large report on the cryptocurrency industry was released by the investment firm a16z. In it, the company claims that cryptocurrencies are still in the formative stage and are at the level of the development of the Internet in 1995. According to them, this means great opportunities for both investors and creators of new crypto companies. A few days after that, Andreessen Horowitz announced the launch of a new $600 million fund to invest in GameFi and Play-to-Earn projects.

Important announcements came from traditional finance companies. Robinhood first announced that it was going to create a non-custodial wallet with full control over its own cryptocurrencies and direct support for DeFi and NFT. A little later, the founder of Revolut Bank announced that he was going to issue its token, which would be earned during the loyalty program. Recall that earlier Revolut announced the development of its Web3 wallet.

Ethereum developers have once again pushed back the timing of the transition to the PoS algorithm. According to the developers, this will happen in August of this year if everything goes according to plan. Otherwise, the transition process may move another 2 months, that is, to September or October.

An important update took place in the Litecoin network, which went unnoticed by most market participants. This blockchain has implemented MimbleWimble technology, which allows you to anonymize transactions and hide the recipients and senders of funds. With the introduction of this update, Litecoin becomes an anonymous coin.

Let’s take a look at the Bitcoin chart and try to figure out which direction the price might go this week: 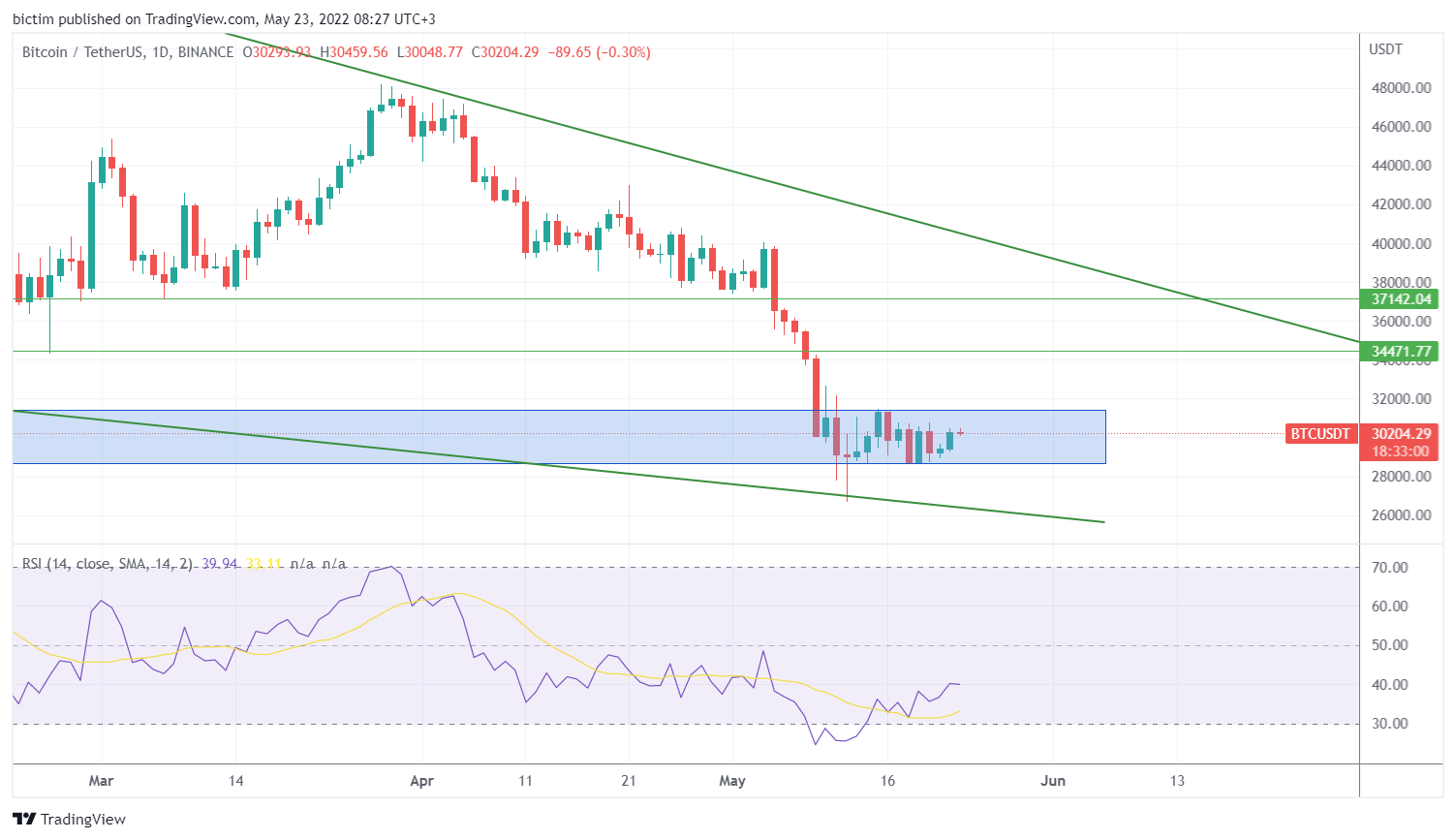 Bitcoin continues to move sideways between $28,800 and $31,400. For almost 2 weeks, the chart has been moving in the specified range. This suggests that market participants are recovering from a strong collapse. This confirms the level of fear, which is at critically low levels. Neither buyers nor sellers have a clear initiative and are not going to actively participate in the market at the moment.

If the price breaks through one of the indicated levels of lateral movement, then the price of Bitcoin has every chance to show a rapid movement of 6% – 8% towards the breakdown. Although such formations on the chart are difficult to read, we expect to see growth. This is indicated by local reversal patterns on lower timeframes. It is likely that this week we can see an increase to $34,000.

In this case, the rest of the market will also follow Bitcoin. If Bitcoin fixes above $31,400, Altcoins will also show more impressive movement. This could be the growth correction we expect.