The price of Bitcoin remained practically unchanged last week. The first cryptocurrency continues trying to break through the important psychological level of $50,000, but without success so far. Trading volumes continue to decline and are already below $30 billion per day. The rest of the market followed Bitcoin’s movements, with the exception of Solana and Cardano, which showed tens of percent growth.

Important news for the crypto industry came from the famous Bitcoin fan – Jack Dorsey. The creator of Twitter and CashApp said a month ago that he was going to launch a new crypto project. He revealed this week that the project will be a decentralized exchange for Bitcoin called TBD. Another project of this entrepreneur will be involved in the creation of this exchange – payment company Square, which is also a large holder of Bitcoin.

At the same time, some problems were found in Ethereum. An unwanted fork occurred due to a previously discovered vulnerability that was publicly posted. The attacker used it and as a result, the chain was split and 450 blocks were reorganized. However, most miners quickly discovered the problem and switched to the correct mining node configuration. This practically did not affect the price of Ethereum.

Moreover, last week another record was recorded in the Ethereum blockchain. This time the network hashrate set the new ATH at 646 THash / s. Prior to this, the moment of the historical maximum fell on May 20th, when the crypto market experienced the strongest fall. This event points to the fact that the market is turning bullish again and Ethereum has significant upside potential.

The world’s largest payment company Visa bought NFT from the CryptoPunks collection for 49 ETH or $150,000 and gained a lot of attention from the world community. One of the company directors explained this purchase by the high historical value of this collection. In addition, he believes that NFT technology is the future of trading and entertainment. This event provoked a strong excitement on NFTs from this collection and their cost soared by 30% – 40% in a few days.

Another important news is another purchase of Bitcoin by MicroStrategy. This time, they bought the first cryptocurrency for a total of $177 million at a price of $45,000. Thus, the company has 109,000 Bitcoins on its balance sheet, which is almost $5.5 billion at the moment.

Let’s take a look at the chart of the first cryptocurrency and try to guess in which direction it will move in the coming week: 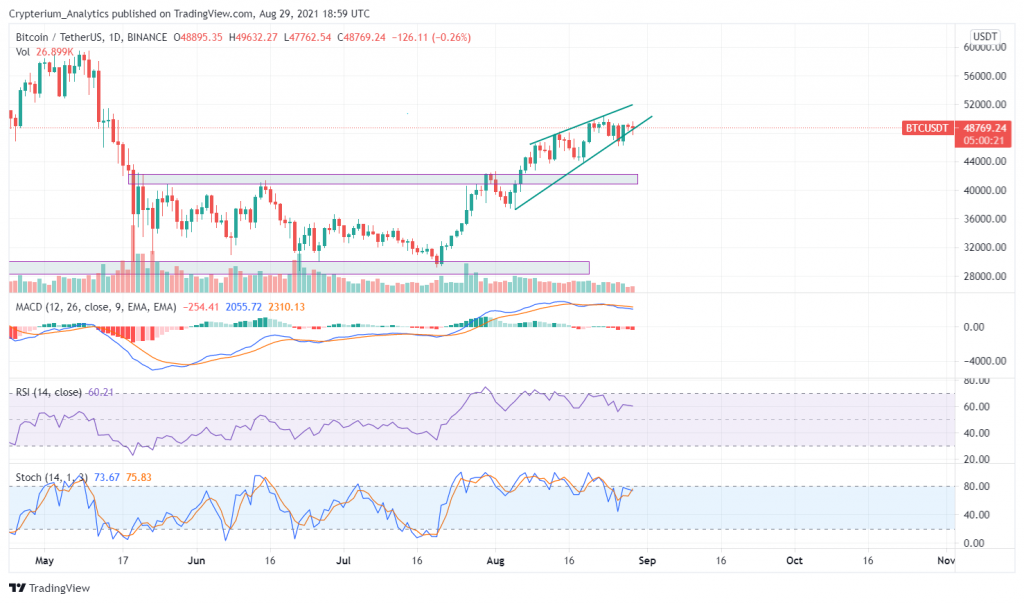 BTC chart continues to move inside the rising wedge. In the last 5 days, buyers have not been able to push the price above the bottom of this pattern. Together with the falling volumes, this indicates that the strength of the bulls in the current movement has dried up.

Bearish divergences of various strengths have been formed on almost all indicators, both on the daily and 4-hour timeframes. Many of these oscillators continue to be in the overbought zone.