Bitcoin fell 20% and is now trading near $35,000. Large altcoins fell 50% from their price maximums or more, while small-cap altcoins lost up to 80% of their peaks. This was due at once to the large amount of news that came out this week.

First, Elon Musk continued to criticize Bitcoin for its centralization and non-environmentally friendly mining. His opinion was opposed by thousands of Twitter followers who support Bitcoin. The head of Tesla has received a lot of negativity this week and he has become a real anti-hero for the crypto industry. But only 3-4 months ago, crypto enthusiasts began to extol him.

Secondly, the founder of Ethereum, Vitalik Buterin, added panic to the market. He said that Bitcoin and the crypto market are in a bubble that could collapse within a couple of months. He also added that Ethereum will soon become 99% greener than Bitcoin and will be able to overtake the first cryptocurrency in terms of capitalization. At the same time, he himself sided with the crypto community regarding Elon Musk and spoke out against his actions.

Thirdly, news about the ban on cryptocurrencies is coming from China again. Banks and FinTech organizations in China have signed a notice that prohibits companies from supporting any cryptocurrency-related business. They also recommended that citizens refrain from investing in the crypto industry. All this can negatively affect Bitcoin mining and the world’s largest crypto exchanges from China.

All of these factors triggered a sharp drop in Bitcoin this week from $46,000 to $30,000. At the same time, altcoins collapsed even more. As a result, the cryptocurrency market capitalization decreased by 40%, or $800 billion. This is a huge indicator for the entire crypto industry and shows the real scale of the fall. This crash is becoming one of the most notable in the history of cryptocurrencies.

In the course of this collapse, there were liquidations worth $8 billion. This is practically the maximum volume of liquidations in the entire history of cryptocurrencies. But at the same time, many large investors, such as Microstrategy, said that they not only did not sell Bitcoin during this fall but even bought it in addition.

Another negative news came from BlockFi. They mistakenly credited their clients with 700 BTC instead of $700. Some of the users were able to withdraw funds from the platform. At the same time, BlockFi began to threaten all of its users, even those who were originally going to return the funds. This once again casts a shadow over centralized systems.

The only positive news this week was another Bitcoin Pizza Day. Recall, that on May 22nd, 2010, the first purchase of a real product for Bitcoin was made. Laszlo Heinz bought 2 pizzas for 10,000 BTC each. In honor of this event, the Dutch division of Domino’s Pizza offered its employees to receive a salary in Bitcoins.

Let’s take a look at the current chart and try to understand what to expect from Bitcoin in the coming days: 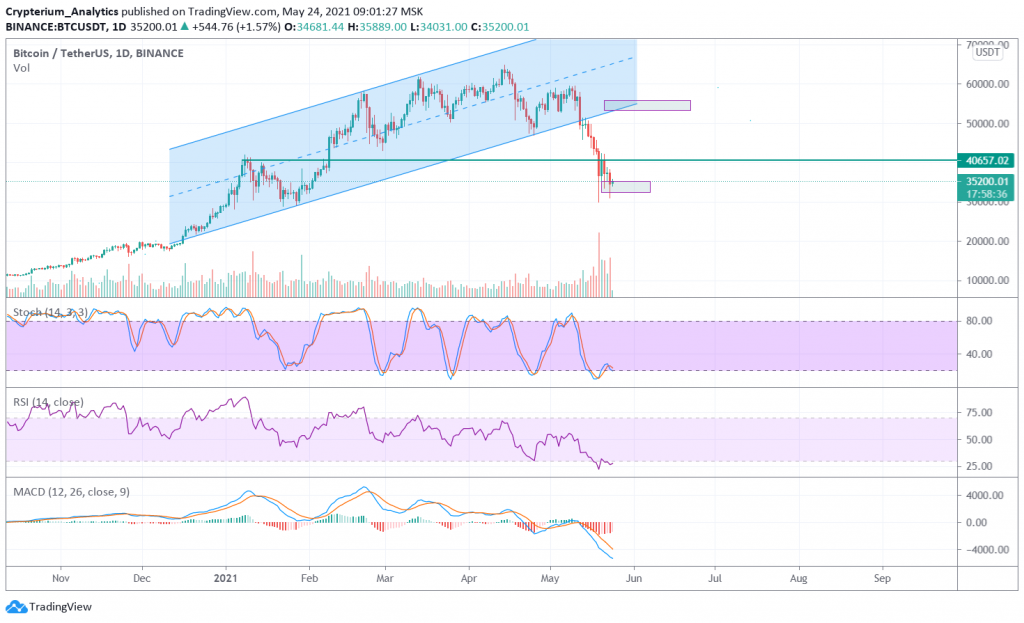 It is clearly seen that in the last 2 weeks the chart has turned into a downtrend. At the same time, the trading volume increased significantly on the fall, which is a negative sign. The nearest support level is in the $30,000 – $32,000 range. This is where the price came in during the falls this week.

The best option now is waiting. It is not yet completely clear in which direction the chart may move. But the current prices are already quite good and you can make purchases for a small part, and when the price rises, increase a position. Thus, the risks are significantly reduced.