During this week, the rhinestone index in the market continued to decline and reached a very low level of 10%. For comparison, during the collapse on March 12, 2020, when Bitcoin collapsed by 70% in a day, this value was 11%. It turns out that the current market sentiment is very bad, and market participants are very afraid of new falls.

The difficulty of the Bitcoin network continues to fall, which this time dropped immediately by 16%. This can be attributed to negative news from China, which is going to severely restrict the mining industry. As a result, there is an outflow of many miners from China and a drop in the Bitcoin hash rate.

Against this backdrop, some companies in the US have formed a Bitcoin mining council. It includes large mining companies, as well as the head of MicroStrategy Michael Sailor and Elon Musk. The purpose of this tip is to disclose data on renewable energy use in Bitcoin mining. All this was the result of statements about the non-environmental friendliness of mining the first cryptocurrency. However, crypto communities and many experts spoke out negatively about the creation of a centralized council of miners.

Despite the negative sentiment in the crypto industry, one of the most famous investors in the world, Carl Icahn, announced that he is ready to invest in Bitcoin. He clarified that his company would be ready to invest about $1 billion in Bitcoin. Ray Dalio also said that he personally invested in the first cryptocurrency but did not name a specific amount.

A large number of hacks this week added to the overall negative on the market. All hacker attacks were carried out on the BSC blockchain. The affected projects were BurgerSwap, JulSwap and BeltFinance. The total damage from these hacker attacks was about $20 million.

Now let’s take a look at the Bitcoin chart and try to guess where the chart will move this week: 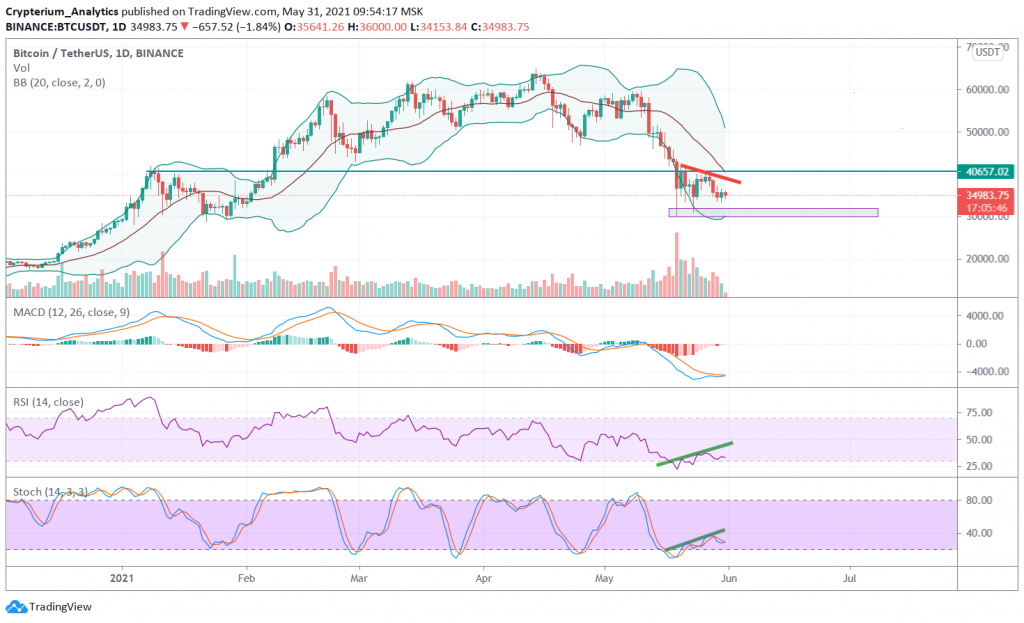 At the same time, obvious convergences were formed on the indicators. The RSI and Stochastic peaks are constantly increasing, but they are falling on the chart itself. This is a bullish signal for the first cryptocurrency and we may consider buying BTC.

The price has bounced off the lower Bollinger band now and may soon rise to the middle line, which is located at around $40,000. As we said earlier, this is where the main resistance level is located, to which the price will strive. That is why we think that soon the schedule will come to him.

In addition, the candle will be closing on the monthly timeframe today. Therefore, today it is necessary to closely monitor the market.