Crypto Weekly: May 2021 Became One Of The Worst Months For Bitcoin Price The last month of spring ended last week. This means that you can estimate the decline in Bitcoin in 30 days. This time, Bitcoin fell by 34.5% in a month, and this became one of the worst indicators for the entire existence of the first cryptocurrency. It was worse only in November 2018 and September 2011, when the Bitcoin price fell by 37% and 40%, respectively.

Just yesterday, it became known that the hedge fund Ruffer Investments made a profit on the sale of Bitcoin in the amount of $1.1 billion in six months. In December 2020, this company invested about $650 million in the first cryptocurrency. Thus, Ruffer Investments was able to earn almost 200% profit.

The largest American crypto exchange Coinbase PRO has added the popular cryptocurrency, Dogecoin, to its platform. As a result, the price of DOGE soared by almost 20% per day. Elon Musk has once again provoked the community to buy Doge with another tweet in support of it. Because of this, Dogecoin has shown the highest growth in a week out of the Top-10 cryptocurrencies.

Another notable piece of news came from Google. The company announced that it would lift the ban on cryptocurrency advertising from August 3rd this year. However, all advertised firms must be accountable to government agencies or have a banking license. At the same time, advertising for ICO and DeFi projects will remain banned.

The positive news for Bitcoin came from El Salvador. The president of this country announced that he is going to make Bitcoin the official means of payment for this country. Supporting this project will be Jack Mullers, who founded Strike on the Lightning Network. Thus, Bitcoin in the future may replace the US dollar as the national currency of El Salvador.

Let’s take a look at the Bitcoin chart and try to predict the further price movement of the first cryptocurrency in the next week: 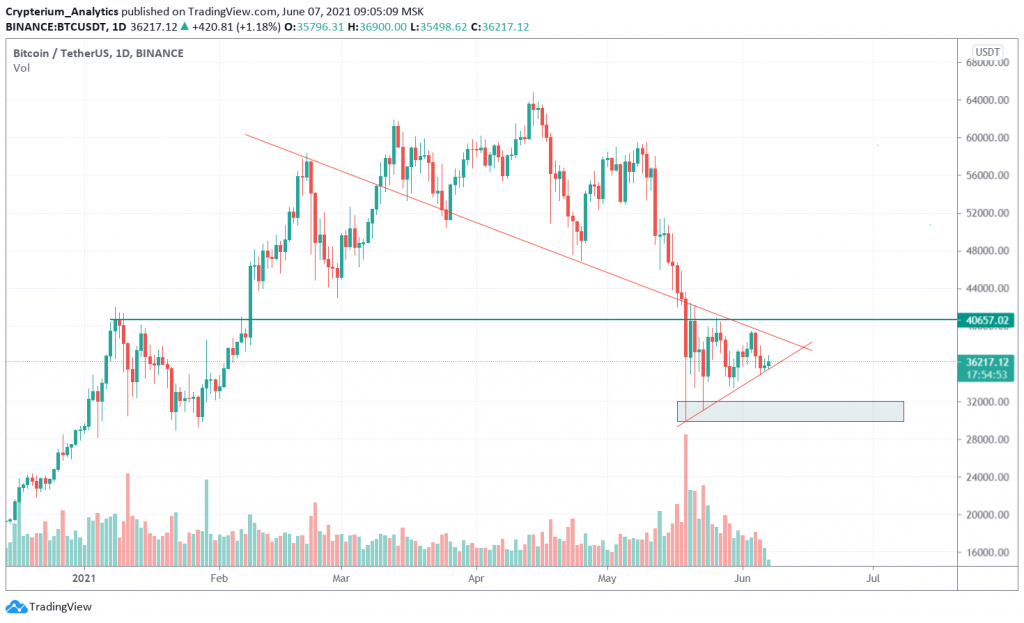 For 2 weeks now, the Bitcoin chart has been in the range of $30,000 – $40,000 and cannot get out of it in any way. Neither buyers nor sellers are in a hurry to participate in the market and have taken a wait-and-see attitude. This can be judged by the trading volume, which has been steadily decreasing in recent weeks.

An equilateral triangle has emerged on the chart, within which the price moves. At the same time, the upper border of the triangle is a strong resistance. This can be seen if the level is stretched upwards and the price often comes to it in the last 4 months.

Based on this, we assume that the chart will break out of the triangle in the next 7 days. If it breaks the upper boundary, which is located at $39,000, then the price could rise to $44,000.

If the chart breaks through the lower border, near which it is now, then the price may fall back to $30,000. And we consider this option more likely at the moment since we do not see any signs of buying power on the Bitcoin chart. We kindly recommend playing it safe and be extra cautious in bitcoin purchases. Crypterium Wallet gives the opportunity to cash out bitcoin directly to your bank card in seconds.