Over the past week, the Bitcoin price has remained almost unchanged at around $38,000. The trading volume and the Bitcoin market dominance also stayed the same. There is still high uncertainty in the crypto market accompanied by the outflow of capital and it is not yet clear how the situation may change.

The past week was not full of crypto news. The most notable event was the decree of the President of the United States on the regulation of cryptocurrencies. It defines 6 main priorities: consumer protection, financial stability, illegal use, leadership in the global financial sector, access to financial services, and promotion of innovation. In addition, the decree orders to consider the possibility of issuing the central bank’s own digital currency.

At the same time, on the other side of the world, in Dubai, the final regulation of cryptocurrencies was adopted and a supervisory body was created. According to the Sheikh, the UAE wants to participate in the development of the global market for cryptocurrencies and blockchain. To do this, they create clear rules that will protect investors and stimulate the development of the technology. Immediately after this announcement, Bloomberg reported that the largest crypto exchange in the world, Binance, was in talks to obtain a license in the UAE.

Another news related to Binance is the creation of the payment company Bifinity, which is positioned as an official payment provider in the field of fiat and digital currencies. This platform already supports 50 cryptocurrencies, as well as EUR, and British Pound payments via SEPA. The next day, the Binance founder announced that he was going to continue acquiring companies that were not related to the crypto industry. According to CZ, this will help to quickly integrate cryptocurrencies into the traditional financial system.

In the world of technical news, it is important to note that the Polygon network experienced a major outage last week. The blockchain stopped producing new blocks for about 8 hours due to a network update failure. The team managed to fix this bug and get the platform back to work. User funds were not affected and were found to be safe.

Meanwhile, Polygon’s competitors are trying to overtake it in terms of scale of use. The Avalanche Foundation, a non-profit organization behind the Avalanche blockchain, has launched a $290 million Multiverse incentive program. This initiative aims to create new subnets on the network that can perform like the Layer-2 solutions on Ethereum.

An important milestone occurred amidst the development of Ethereum and its transition to the Proof-of-Stake algorithm. The amount of blocked funds on the Ethereum 2.0 contract exceeded 10 million ETH or $26 billion. This stands for 8.6% of all coins released on the market.

Let’s take a look at the Bitcoin chart and try to understand the direction it will take this week: 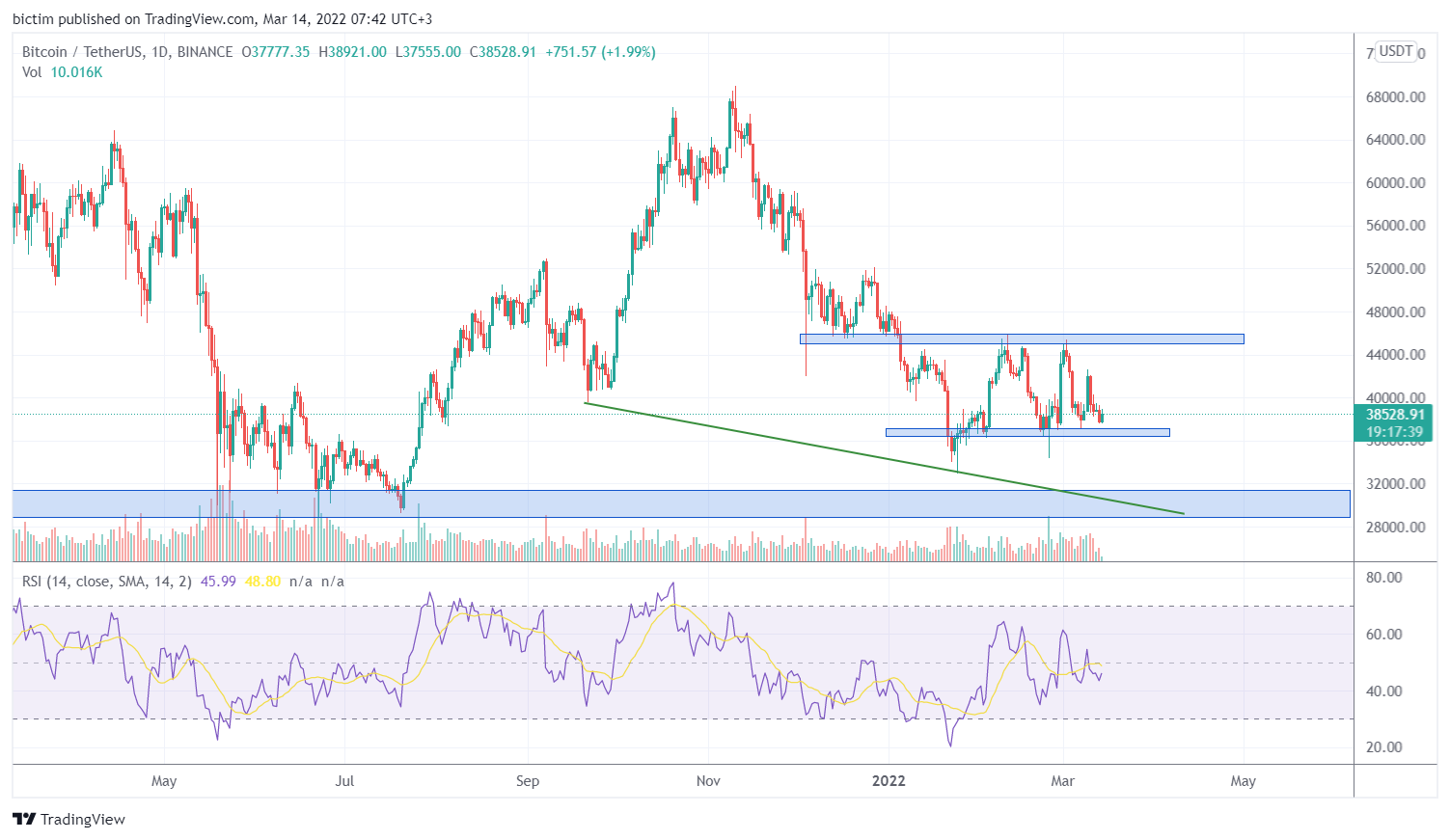 The chart clearly shows that sellers are now dominating the market. In the last month and a half, bulls have tried to reverse the trend several times, but have not succeeded. Bears quickly pushed the price down to the nearest support level of around $37,000. A similar situation occurred last week, when buyers raised the price by 10% in 24 hours, but sellers returned it to the previous values in a matter of days.

This becomes even more obvious when you open the weekly chart of Bitcoin. For the past 3 weeks, Japanese candlesticks have had very long upper shadows and small bodies. This suggests that sellers are confidently maintaining this level and do not allow the trend to reverse.

Altcoins feel even worse as they are no longer of any interest. The focus is now on Bitcoin, so their prices are constantly declining. At the same time, the market volatility has significantly decreased, as the influx of new market participants has stopped. Based on this factor, we can assure that the cryptocurrency market has finally entered the bearish phase.