Last week, the Bitcoin price remained almost unchanged at $38,000. Meanwhile, the end of February turned out to be very volatile for the crypto market: the sharp fall was followed by a sharp rise, and by now, cryptocurrencies have recovered to week-old levels.

This happened primarily because of the biggest news, which triggered massive sales on the market. This event also led to the fall of all markets and caused new sanctions to be imposed against Russia and its banking system. Because of this, the Russians began to buy cryptocurrencies en masse. The trading volume has grown tenfold on local crypto exchanges. The same situation occurred on the Ukrainian crypto exchanges. Thus, by the evening of February 24, the price of Bitcoin turned up and even exceeded previous levels.

The crypto community actively reacts on the situation in the Ukraine. So, the oldest Bitcoin mining pool, Slushpool, transferred 10 BTC as a charity and allocated 2.5 PH/s to help Ukrainians. Binance has donated $10 million as humanitarian aid and has also set up a charity fund with a goal of $20 million. The FTX exchange has credited $50 to each Ukrainian user registered on their site and verified through KYC. In addition, the crypto community has launched several charity funds and has managed to raise around $15 million so far.

However, there were other developments in the crypto industry as well.

The Fed complemented the rules prohibiting officials from trading financial assets by adding cryptocurrencies to this list. The ongoing restrictions will affect FOMC members, regional bank presidents, and officials who attend open market committee meetings. The officials’ family members are also subject to the prohibition of trade.

It became known about the mass exodus of miners from Kazakhstan. Legal mining companies have already removed about 30% of all equipment from this country. The relocation is caused by the lack of electricity supply and the upcoming increase in taxes for miners. Recall that Kazakhstan became the second country in terms of hashrate after the mining had been banned in China.

For more than a year, the trial of the BitMEX exchange founders has been going on. Last week, it became known that Arthur Hayes and his partner Ben Delo pleaded guilty to evading the organization of measures to combat money laundering. Each of them agreed to pay a $10 million fine.

Let’s take a look at the Bitcoin chart and try to figure out what we can expect from it in the coming week: 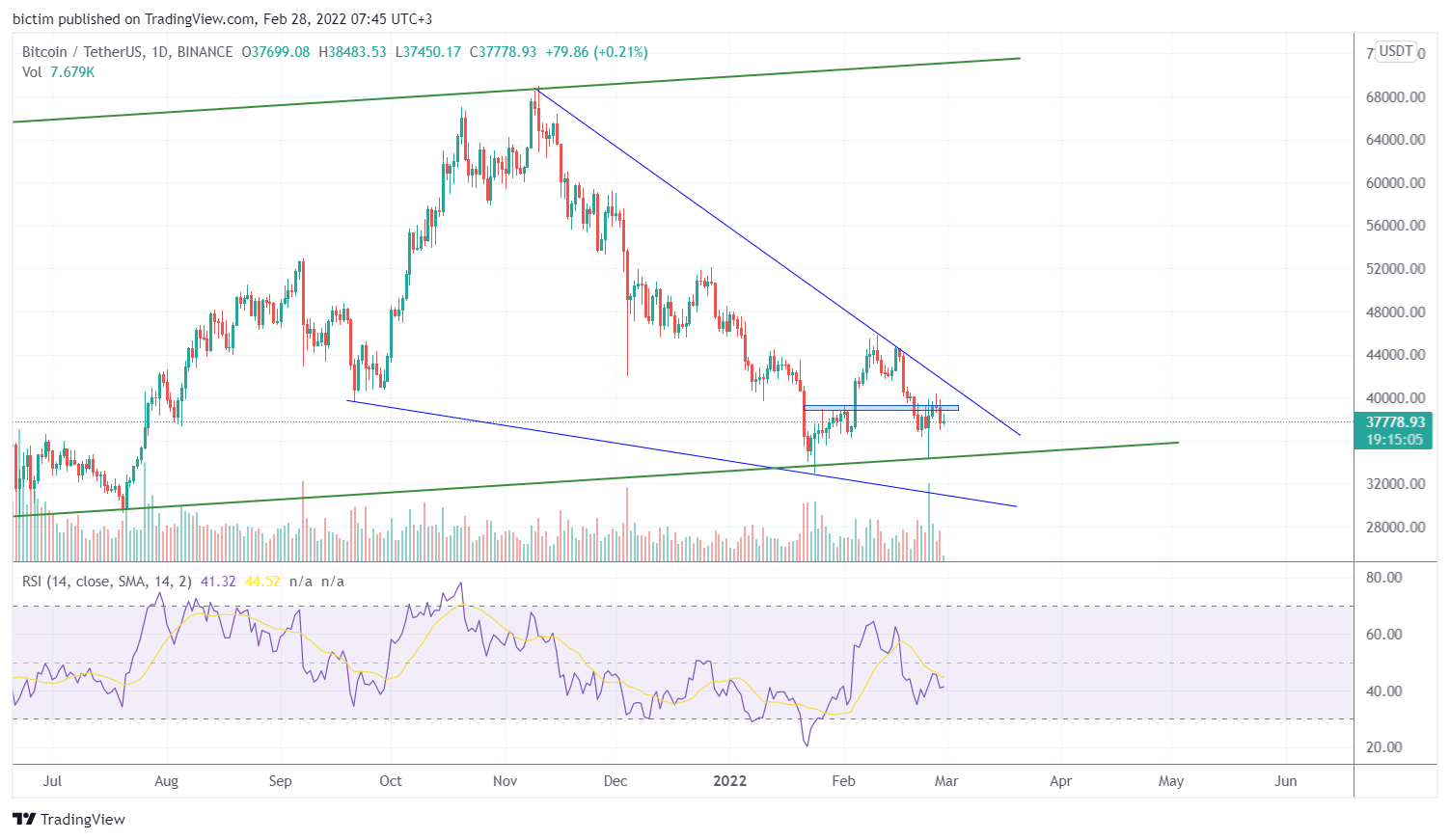 As we expected, buyers failed to overcome the $38,000 – $39,000 area last weekend. This is an important resistance level for Bitcoin. If the price consolidates above it, the chart will hit the downtrend. This means that we may see a struggle between buyers and sellers this week, which will be accompanied by high volatility.

At the same time, it is difficult to say which direction the price may take. This depends on many international factors that are impossible to predict. In this regard, it is necessary to wait for more explicit conditions for making transactions.

Bitcoin still remains within a bullish wedge and within a global uptrend. Therefore, it will be possible to enter purchases only after the downtrend at $39,800 – $41,800 is broken.

A bearish wedge has appeared on the BTC dominance chart over the past month. This means that the Bitcoin market share may decline again. It also means that the capital may flow to altcoins soon. From a historical point of view, this time is usually called the altcoin season.