The reason for such a sharp collapse was another negative news from the SEC. This time it became known that it will sue the largest American cryptocurrency exchange Coinbase if the project launches a lending service based on USDC. According to the commission, this will force the stablecoin to be regarded as a “security”. Coinbase CEO wrote about it on his Twitter page.

XRP director Brad Garlinghouse noted that the SEC puts Coinbase in a very disadvantageous position and hinders business development. At the same time, he said that his company also has similar problems with the SEC and hoped for joint cooperation with the crypto exchange Coinbase.

All this led to a large-scale drop in the entire crypto market, which began on Tuesday and continues until the current moment. The government of El Salvador managed to take advantage of this collapse and was able to additionally buy 150 BTC to their reserves. On the same day, a law came into force in this country that recognized Bitcoin as a means of payment. The very next day, such large companies as McDonald’s and Starbucks began to accept Bitcoin as payment for their products.

Another big piece of news came from the SEC last week. They have moved the consideration of VanEck’s Bitcoin ETF application. It should be noted that this application is submitted on behalf of the Chicago Board Options Exchange (CBOE), which is interested in this instrument. The application was submitted at the beginning of March this year and its consideration has been postponed for the third time. This is the maximum time period given by the SEC for considering such cases. The final decision on this matter should be made by the regulator in 2 months, on November 14th.

All this had a negative impact on the cryptocurrency market. However, few people noticed that SIX Group received FINMA licenses to set up a cryptocurrency exchange and central depository in Switzerland. SIX is the largest Swiss exchange and it plans to introduce cryptocurrencies for its clients and create an international network for the exchange of digital assets.

Also, the news about the purchase of the company CipherTrace, which monitors suspicious activity on the blockchain, passed unnoticed. One of the largest payment systems – Mastercard became the acquirer. The company is doing this in light of expanding its work in the crypto industry and providing complete and clear data for its clients and regulators.

Positive news concerning hacking can be noted. Two weeks ago, a hacker broke into the CREAM Finance protocol and withdrew $18 million. However, after 7 days, the attacker returned all the stolen funds back to the protocol. Recall that earlier a similar situation occurred with PolyNetwork when a hacker withdrew $611 million and then returned it within two weeks.

Let’s take a look at the Bitcoin chart and try to understand where the price will move in the next week: 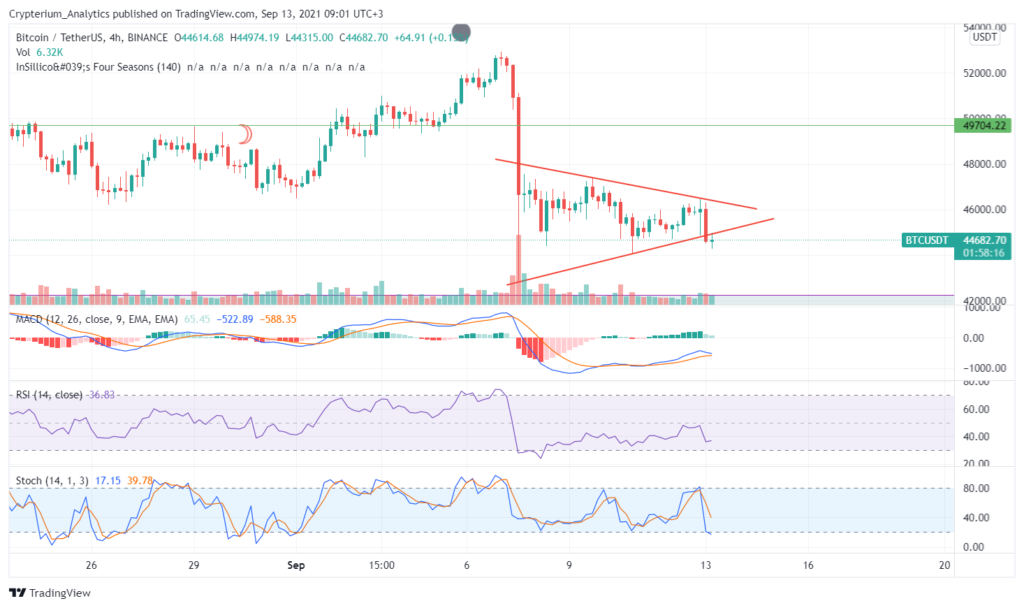 After the chart fall, Bitcoin moved sideways. Its price ranged from $44,000 – $47,500. This led to the formation of a triangle. This figure can work both up and down. This pattern is a continuation of the trend, so the direction of the exit depends on whether we see an uptrend or a downtrend.

Indicators are heavily oversold on the 4-hour timeframe. On the daily timeframe, Stochastic has moved down to the lower border, while the RSI is hovering near the middle line. This may indicate an impending reversal on the market.

However, before that, the price may fall once more to the $42,000 area in order to finally kick all long traders out of the market. In this case, the growth will be more dynamic and Bitcoin will be able to reach the $48,000 mark, which is now the key one.