First of all, this concerns the Cardano project, which grew by 40% in a week and updated ATH. Thanks to this, the capitalization of this cryptocurrency amounted to over $90 billion. This allowed ADA to become one of the most popular coins on the market in a week. Also, the coin was able to overtake BNB in ​​terms of capitalization and confidently consolidated its position on the 3rd line among the largest cryptocurrencies after Bitcoin and Ethereum.

A new hacker attack occurred this week. This time, the victim was one of the largest Japanese cryptocurrency exchanges – Liquid. The hacker was able to access hot wallets and carried out the withdrawal of Bitcoin, Ethereum, XRP, Tron and ERC-20 tokens for a total of $80 million. The exchange is taking steps to return the funds, but so far this has not been crowned with success. Deposits and withdrawals on Liquid are temporarily suspended.

Another big piece of news for Japan came from Coinbase. The largest US cryptocurrency exchange, listed on the US stock exchange, plans to enter the Japanese market. Coinbase is set to open an office in Tokyo and launch the Coinbase Japan crypto exchange. The partner of this project will be the financial conglomerate Mitsubishi UFG Financial Group, which serves over 40 million clients. This will allow tens of millions of Japanese people to deposit and withdraw funds to the new crypto exchange.

Important news comes from the Binance cryptocurrency exchange. The company has tightened the rules for working with its trading platform. Now every new registered user will be required to undergo identity verification. Already existing users without verification will not be able to conduct trading operations, they will only have access to withdrawal and cancellation of orders. The move confirms Binance’s intentions to get back on track. Recall that in the last 2 months, many regulators announced the absence of licenses to operate this exchange.

The largest funds continue to invest directly or indirectly in the crypto industry. It became known this week that the financial giant BlackRock bought shares of mining companies Marathon and Riot Blockchain for almost half a billion dollars. Previously, similar actions were taken by other financial giants such as Fidelity and Vanguard.

The past week was positive for the cryptocurrency market. It’s capitalization again exceeded $2 trillion, and individual projects such as Cardano and Solana showed impressive growth of tens of percent. Let’s see how this affected the chart of the first cryptocurrency and what to expect from it this week: 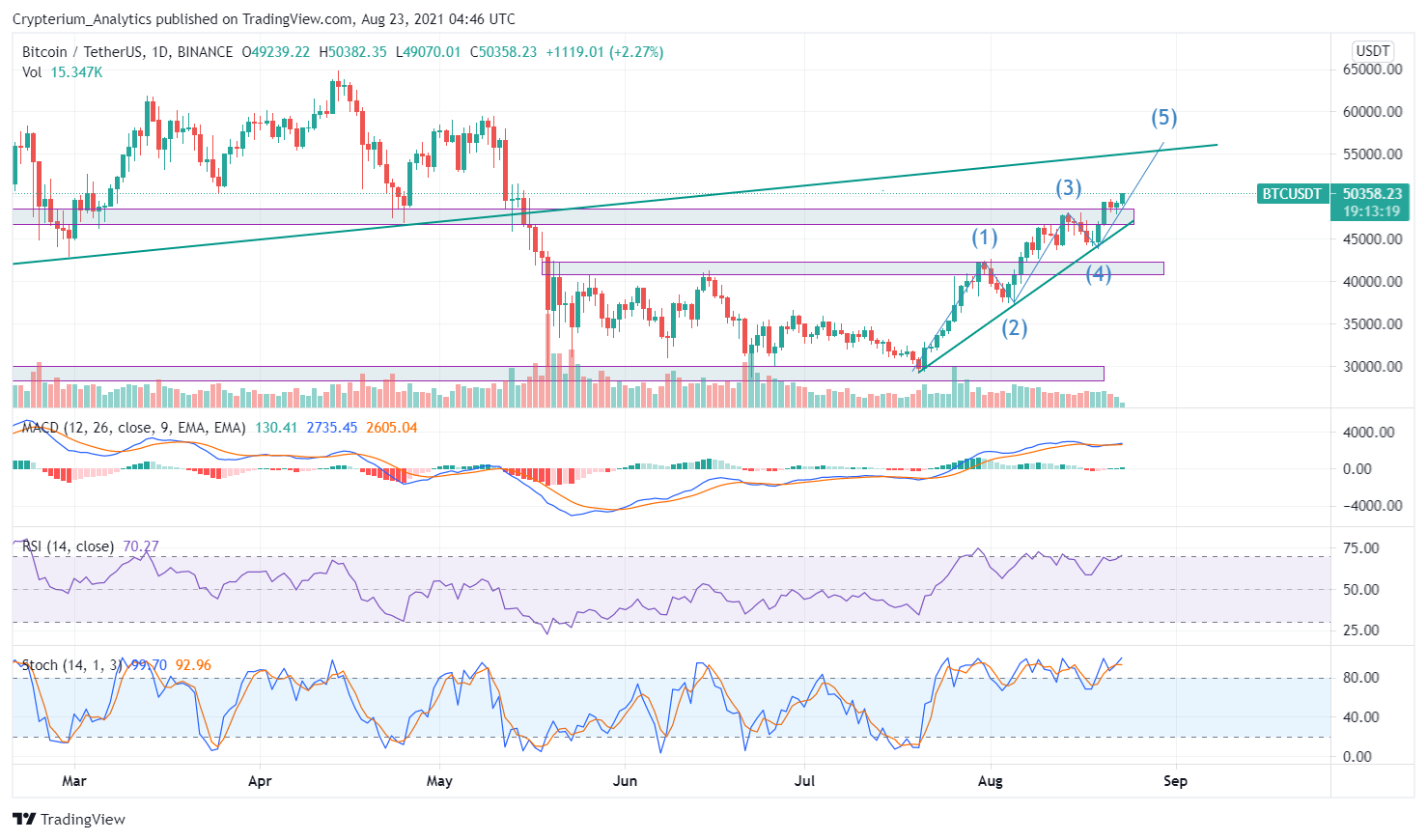 Over the past 30 days, the price of Bitcoin has already increased by almost 70%. For a long time, buyers could not overcome the $48,000 mark and the chart rolled back down. However, this weekend the bulls were able to confidently gain a foothold above $48,000, which led to a rapid jump to $50,000.

The weekly candle closed very strongly and indicates further growth. The wave structure that we have drawn on the daily timeframe is relevant and so far the chart is strictly following it. Based on this, there is a high probability that this week the price of Bitcoin could make another spurt upward in the range of $55,000 – $56,000.

This development is also indicated by the Bitcoin domination chart, which has been in decline for a long time. According to many indicators, it can be called oversold, so in the near future it can also turn around precisely due to the growth of the first cryptocurrency.