The last 7 days were extremely negative for the cryptocurrency industry. The BTC price decreased by 8%, in the past week it was down by 21%, but buyers pushed it up to $30,000. Altcoins faced a more dramatic situation: many of them were down by 40-50%. The largest collapse happened since May 2021.

Problems with the Luna project and its stablecoin UST were the key factor of these events. Early last week, UST lost its peg to the US dollar and its rate dropped to $0.98. After 2 days, the stablecoin was down to $0.60. Therefore, the strongest collapse of the Luna price occured. In one day, the project price decreased from $90 to $27. However, the collapse didn’t stop there.

After that, there was information on the web about attacks by BlackRock and Citadel on the Luna project. Supposedly, they took out a loan from the Gemini exchange in the amount of 100,000 BTC and exchanged a quarter of them for the UST stablecoin. Then BlackRock and Citadel began a coordinated attack on the project. The companies themselves maintain total deniability in this incident. Now the Terra project team is planning to restart the blockchain and related products, as well as restoring the UST peg to $1.

Another news to be observed is the Instagram’s implementation of NFT for some users. Currently supported blockchains are Ethereum and Polygon (Flow and Solana are in the plans). You can add a profile NFT-photo using non-custodial wallets Metamask, Trust Wallet and some others.

And that’s not all! Elon Musk suspended a deal with Twitter at his own initiative. According to him, he’s evaluating fake accounts to make a decision on the share buyback price which decreased by 16% against this background. A little reminder: Twitter also supports NFT-avatars and cryptocurrency donations.

Let’s take a look at the Bitcoin chart and try to guess what to expect next: 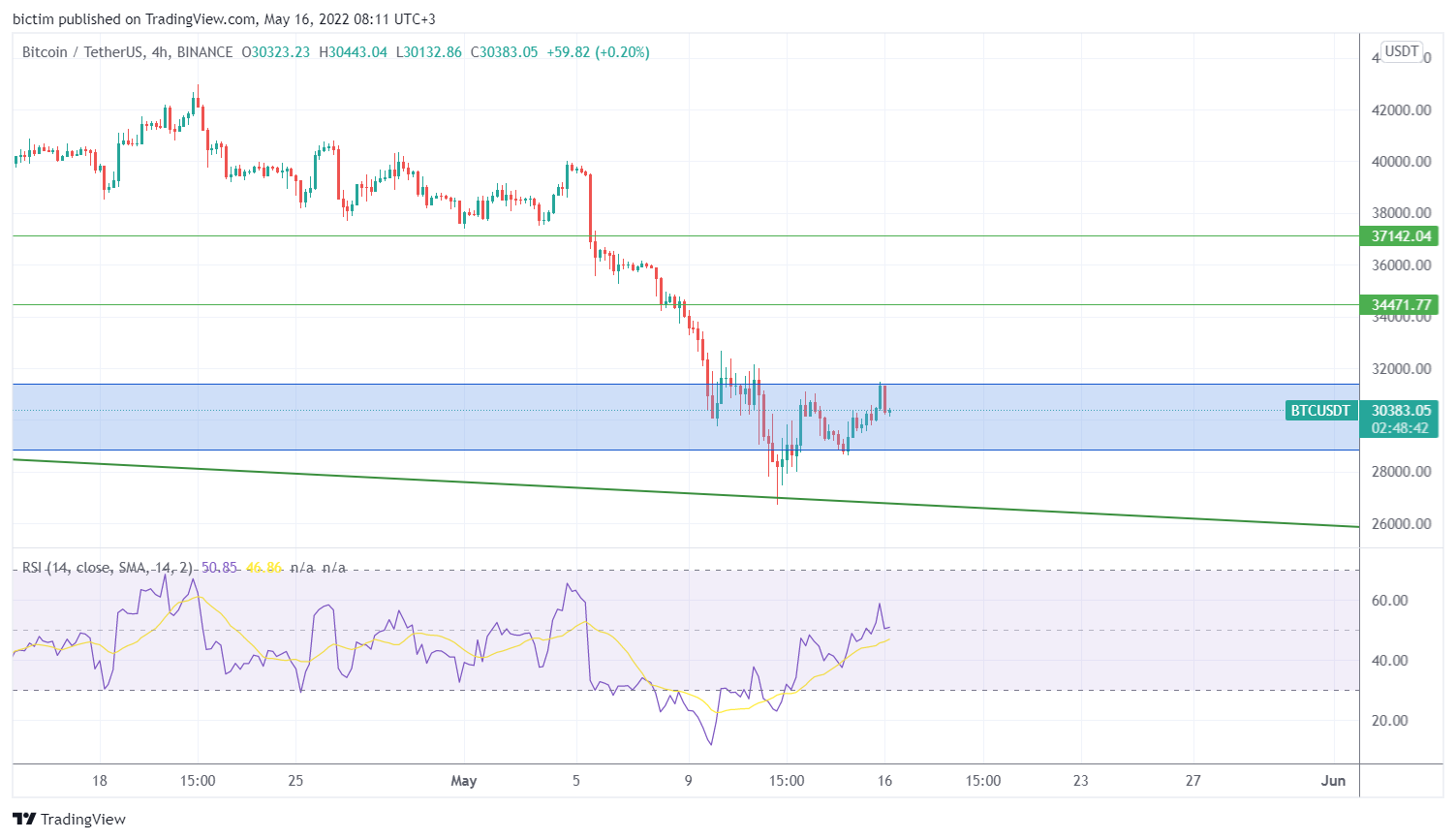 The Bitcoin chart briefly fell below the global support level in the range of $28,800-31,400. The price was down to $26,700, then the buyers stopped the collapse, so the BTC price increased by 17%. Thus, the support level was able to withstand.

You can see the formation of a reversal pattern on the 4-hour timeframe that looks like an “inverted head and shoulders”. Moreover, a strong convergence appeared on the chart, indicating a local increase within the current week. Therefore, the BTC price could reach $35,000 in the coming days. The altcoin market has significantly collapsed, so a fall correction is highly expected this week.

The Luna incident is coming to an end, in the next 2 days the team will provide the final recovery plan. It could ease the pressure in the crypto market and change its participants’ mood. That’s why a pretty strong increase of the altcoins price by 10-20% is possible.