From all of last week’s significant news, we need to emphasize the results of the FED meeting, particularly the postponement of the final asset repurchases from June to March. In addition, this financial body is planning 3 key rate hikes at once instead of one that was previously announced. This is due to high inflation, which reached 6.2% in the United States and set a thirty-year maximum. All this can affect the crypto industry in a negative way.

Another US regulatory body, the Securities Commission (SEC), continues to reject applications for spot Bitcoin ETFs. This week, consideration of two applications from Bitwise and Grayscale was postponed to the beginning of February. Grayscale called these decisions illegal and arbitrary. The SEC continues to persist in the Bitcoin ETF relationship, although in October the regulator approved 3 Bitcoin futures ETFs right away.

China is still fighting against cryptocurrencies. As for today, the government has issued a law that prohibits posting videos about cryptocurrencies as well as Internet mining. This governmental move is suggested to increase social stability and resilience within the country. Additionally, this law states that you must not post materials that defame the ruling party, socialism and China as a whole. Using these methods, the PRC government plans to create a pure cyberspace.

Another big news came from the creator of Tron, Justin Sun. He announced his leaving from the Tron Foundation to take over as Grenada’s Representative to the World Trade Organization. At the same time, he noted that he did not step aside from the Tron project, but was removed as a leader in order to give the network a higher decentralization and independence. However, despite this fact, the TRON price fell by 10% almost instantly.

Among other important events, there are the innovations that were released by the 1inch project. The company presented the second version of the limit orders protocol that will be able to execute transactions with no Ethereum stored on the wallet account. All commissions will be taken from the ERC-20 tokens that are exchanged to each other. This feature will be available not only for Ethereum, but also for the BSC and the Polygon networks.

The past week has not been marked by any devastating news. Most likely, this is due to the upcoming holidays, which caused a decrease in the market activity. As a result, the market volatility started falling. Let’s take a look at the chart and try to understand how Bitcoin will behave during the Christmas week: 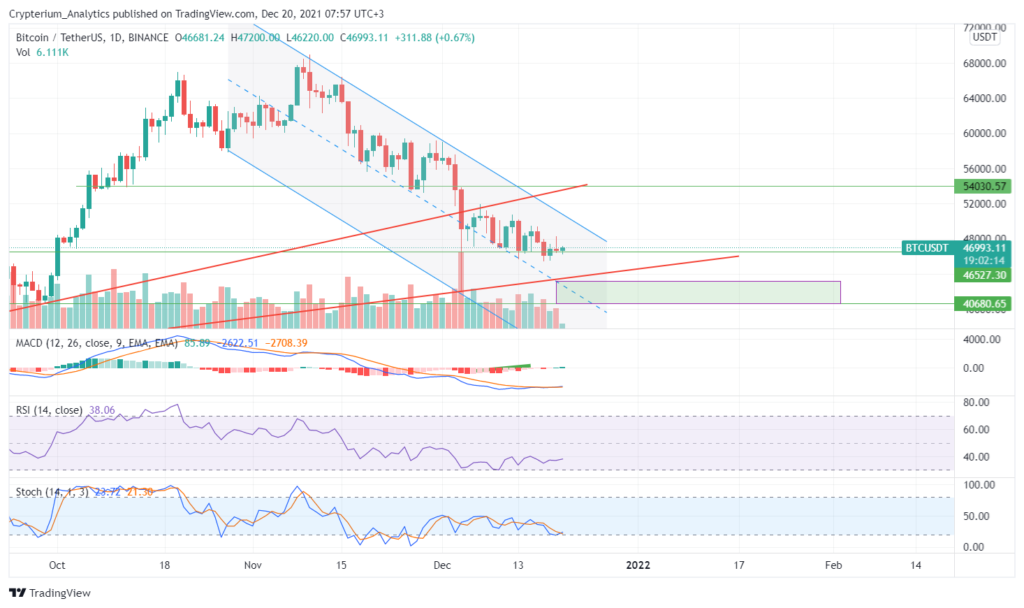 The chart has remained almost the same since last week. Bitcoin is still moving around the centerline within the large descending channel. Now, the local support level is fixed in the $45,500 – $46,500 area and is well-protected by buyers, who don’t let the price go down.

The market situation is still uncertain. A new drop is likely, primarily due to the fact that the market interest has been declining prior to the coming holidays. Thus, the price can slowly slide down to $43,000. However, each drop is quite tough, so we assume that buyers will be able to bring the price back up rather quickly.

After that, Bitcoin can finally turn upward based on many indicators that are approaching the overbought borders and can be interpreted as a buy signal. In addition, the market is experiencing a state of fear, which is a great time to enter purchases.