Most of the news came from the UK. Thus, Santander Bank announced that it would block customer payments to the Binance exchange. According to them, this is due to the protection of clients from the activities of the exchange since government agencies have banned the activities of this organization in their country. A week earlier, financial giant Barclays made a similar announcement. In response to these claims, Binance has disabled all SEPA payments.

The news about the ad ban came from the largest social network TikTok. The company will fight bloggers promoting cryptocurrencies. This is due to the fact that the management of the social network considers this to be a high-risk investment. This is partly true because the price of Dogecoin has skyrocketed several times by thousands of percent, thanks to the high popularity of this coin within this platform.

Other notable news came from the Circle conglomerate. The company plans to enter the NYSE through a merger with Concord. In this case, the valuation of the company will be about $4.5 billion. With the proceeds from the stock listing, Circle plans to build and scale new products.

The very next day, similar news came from Block.one, which developed the EOS blockchain. At the moment, this team is working on their own crypto exchange, and they announced that they also plan to enter the stock exchange through a merger with Far Peak. In this case, the valuation of the new crypto exchange will be $9 billion.

In important technical news, it is worth noting that the Ethereum test networks have been successfully tested and have been London hard fork. That being said, the team has yet to decide when they will launch the hard fork on the mainnet. This issue will be decided at the general meeting of developers, which will be held on July 23rd.

The past week was full of news related to the regulation of cryptocurrency activities. However, this practically did not have a strong influence on the price. Let’s take a look at the Bitcoin chart and try to figure out what to expect from it this week: 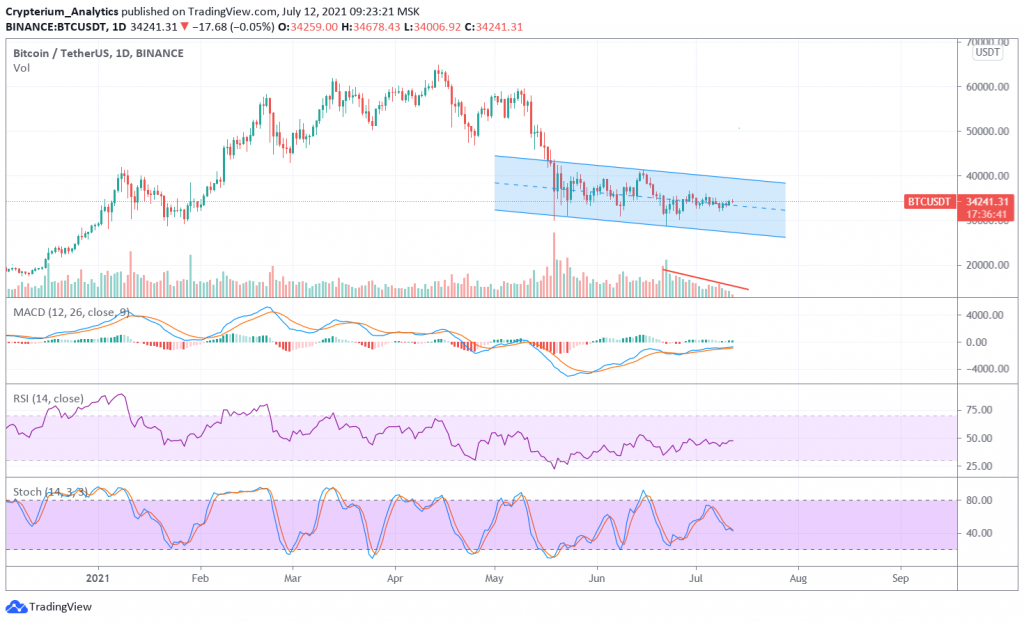 The Bitcoin chart is in a downtrend and sideways trend. In the last three weeks, the price has been moving near the middle line and practically does not deviate from it. Volatility has significantly decreased and amounts to 2% – 3% per day. This is a very low value for Bitcoin.

Trading volumes continue to decline. At the moment, they amount to $ 21 billion per day. MACD rose to the equilibrium point, however, it slowed down very much and did not show any dynamics. On the rest of the oscillators, the situation looks similar.

All this indicates that there are practically no buyers or sellers in the current market, and the market is slowly losing liquidity. In this regard, there is a high probability of a new decline to $30,000 and even lower.