Over the past day, the market has won back the fall that occurred at the beginning of the week. Bitcoin is up 4% and is back in the $57,000 – $58,000 range; Ethereum has broken through $4,000 and is preparing to set new highs. But the dominance of Bitcoin continues to decline, and now it is already 42.4%.

In recent weeks, the price of Dogecoin has risen by 1000% and almost reached $0.75. We are now seeing a correction, during which Dogecoin dropped to $0.49. However, even at such a price, the capitalization of this cryptocurrency remains impressive – $64 billion.

Let’s take a look at the Dogecoin chart: 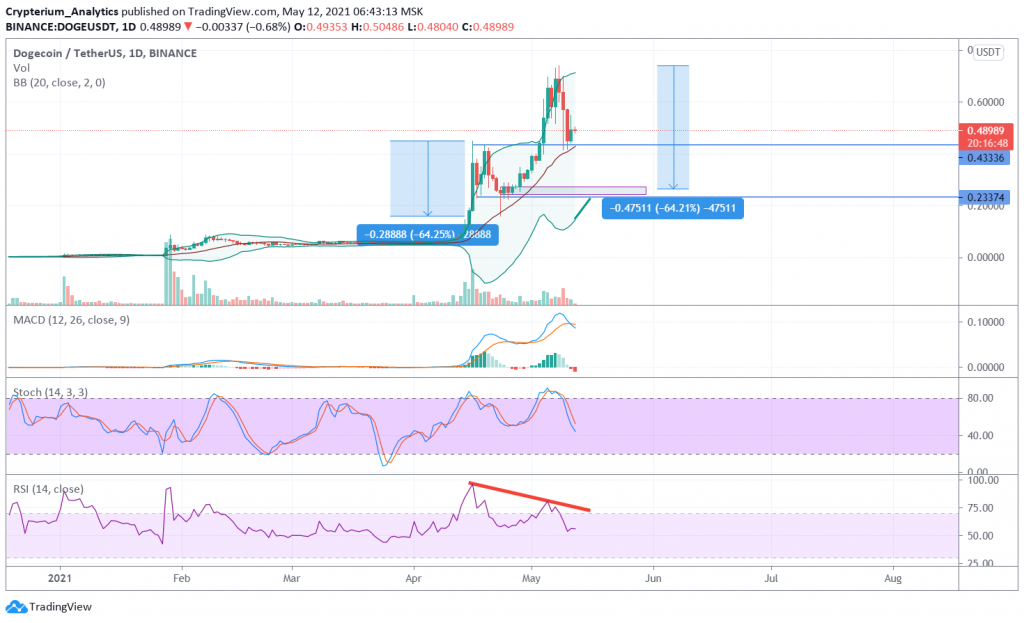 Each of these leaps was due to the influence of Elon Musk. He is actively promoting Dogecoin on their social networks and in every possible way expresses support for this coin. His fans echo him and start buying Dogecoin. All of this is very similar to market manipulation.

On the Dogecoin chart, the strongest bearish divergence has formed on the RSI indicator. The peaks and low of this indicator are progressively decreasing, which is contrary to the DOGE chart. This is the strongest signal for a decline.

Stochastic also turned down and has already dropped significantly. Most likely, the trend will continue in the coming days, and it will reach the oversold border. MACD is also turning down. Its junior moving average line crossed the senior one from top to bottom, and the gap will only widen.

The chart clearly shows two support zones at $0.49 and $0.25. This is almost entirely in line with the middle and lower Bollinger bands. Now the price is already around $0.49 and is trying to stay higher, but buyers are still weak and cannot turn the price up.

Most likely, the price will decline to the next support at $0.25. By this time, the lower Bollinger band will also reach this level, and the DOGE chart will touch it. At the same moment, all other indicators will be unloaded, and the bearish divergence is fully worked out.

That is why we believe that the fall of Dogecoin will continue because its chart falls by 40% – 60%, which is considered the norm for this cryptocurrency.

Additionally, it should be noted that Barry Silbert (owner of DCG and Grayscale) opened short positions on Dogecoin. This is another sell signal.But if you want to get trading signals with over 96% accuracy, use our AI Price Predictions.

Trading Dogecoin is a very dangerous business. This coin is nothing special and can be manipulated very easily. And the current capitalization does not correspond in any way to its real position in the market.