Whether you’re searching for a coin with growth potential or simply exploring the vast universe of cryptocurrencies, Ripple’s XRP is definitely a currency you cannot overlook.

In 2020, the cryptocurrency market has returned to a growth path and XRP hasn’t been an exemption. This remarkable token has advanced from $0.19 (Jan 1) to a peak of $0.78 (Nov 24) aligned with Bitcoin’s massive growth. Yet, that’s not the only upside factor.

According to our analysis, there were three fundamental factors that have supported XRP’s growth in 2020. First, a spike in blockchain activity. On-chain analysis company Santiment found that the XRP network recorded its highest output in November 2020.

Another bullish factor for XRP is the coin’s repurchase program. In the third quarter of 2020, Ripple started a series of systematic purchases of XRP to promote healthy market activity. The company reported purchases for a total of $45.5 million worth of XRP in Q3 2020.

Last but not least, Ripple Labs registered a new product with the United States Patent and Trademark Office in November — Paystring. While there’s no certainty over this product, it’s still considered a step forward for the company’s development.

The trademark application describes the product as follows:

In order to understand the current price of Ripple XRP and its price prediction, it’s vital to look at the underlying value of this particular coin, as well as its primary characteristics and features.

First off, let’s start by speaking properly. Ripple isn’t the same as XRP. Ripple is a private company building a real-time payment, exchange, and remittance network on top of a distributed ledger database, the XRP ledger.

Ripple was born in 2004 when Ryan Fugger sketched the first prototype of a decentralized payment system under the name RipplePay. In 2005, the system was initially launched with one goal: offering reliable payment solutions within a global network.

Jed McCaleb and Chris Larsen took over the company in 2012 and rebranded it as OpenCoin. From that moment, the project started to focus on developing a protocol to provide payment solutions for banks and major institutions. Three years later, the company returned to its original and current name, Ripple.

In 2019, Bank of America confirmed a collaboration with Ripple’s XRP Ledger to test the distributed ledger technology on cross-border payments.

Bank of America isn’t the only financial institution testing out this technology. Spanish banking giant Santander also announced a remittance system to cover the busy US-Mexico powered by Ripple’s technology.

“At the other end of the spectrum, many Mexicans are sending $36 billion every year from the US to Mexico. We are launching a fast, competitive remittances program initially just from the Santander branches to any bank in Mexico,” Santander Spokesperson Ana Botin told Bloomberg.

Santander is implementing Ripple as an alternative to the long-lived Swift system. Reports point out that over 300 banks and payment systems have started trialing Ripple’s xCurrent and On-Demand Liquidity (ODL) in 2019.

Despite being only second to Bitcoin (BTC) and Ethereum (ETH), many people still aren’t aware of XRP and its origin. Ripple’s ecosystem for instant, low-cost cross border transactions uses its token XRP to move funds across the world.

Ripple has issued 100 billion XRP tokens. While the company now insists that there will never be more XRP out there, there’s no technical impediment.

The price is clearly affected by the adoption of Ripple services by major institutions. Yet, it’s worth mentioning that XRP is totally independent of the Ripple network, meaning banks that want to use the XRP ledger for remittance services don’t actually need XRP to transfer dollars, euros, rubles, etc.

XRP was conceived as a coin that smoothes financial transactions, not as an investment. In other words, it serves as a tool within a B2B network. The development of the Ripple network, however, does play an important role when it comes to XRP predictions.

The XRP protocol is led by xRapid, which enables cheaper and faster solutions than its competitors. Also, Ripple’s solid protocol makes it a highly scalable product.

Ripple’s transaction speed stands at 1500 Transactions Per Second (TPS), which is way faster than Ethereum or Bitcoin. 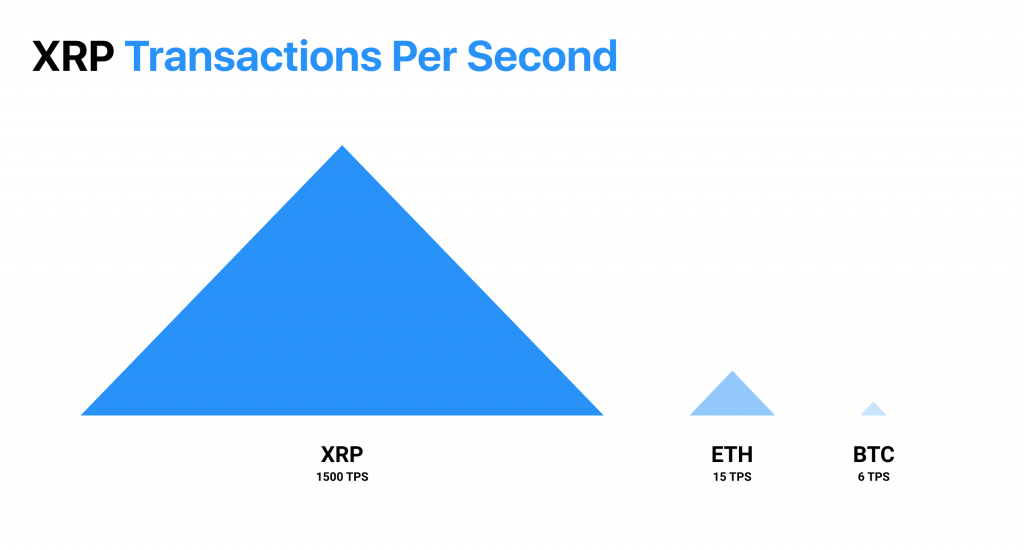 Who’s behind Bitcoin? Satoshi? Who’s Satoshi? You get the idea. In most cases, there are no companies behind cryptocurrencies, which can be either good or bad. For XRP, being the token of the Ripple ecosystem isn’t necessarily a bad thing at all.

While Ripple’s XRP isn’t meant to be an investment vehicle, you can still put money on it. After all, it only costs a few cents (for now). The low price makes a perfect entry point for small and middle-size investors that can’t afford to buy huge sums of Bitcoin or Ethereum.

Another thing to keep into account is XRP’s market capitalization. Ripple has shown less volatility than other mainstream cryptocurrencies, making a more resilient investment even on the worst days for trading digital assets.

Ripple’s XRP isn’t a new coin. It has been around for quite a while now. Yet, the adoption of Ripple services hasn’t been massive. The number of large financial institutions testing out Ripple services remains limited, but there’s no doubt it’s making its way in the industry.

Unquestionably, Ripple’s XRP would benefit massively if banks and other financial players start conducting payments in XRP. To turn that into a reality, more infrastructure, technological improvements and a far wider acceptance is required.

Okay, let’s be fair. This isn’t really a disadvantage of Ripple’s XRP. It’s something all cryptocurrencies have to (unfortunately) deal with nowadays. On the bright side, Ripple has faced numerous misconduct lawsuits over the years and won every single one of them.

With blockchain standards expected to continue expanding during 2021 and XRP keeping its position as the world’s third most powerful cryptocurrency, the prospect is overall positive. Consensus points at the $2 mark by the end of 2021, but that will require additional institutional support in the form of agreements or bank-level implementation. Needless to say, getting to the $2 mark will also depend on whether XRP can find support in the $1 mark, a level that’s still seen as a challenge for this currency.

As the use of XRP increases through a partnership agreement, its value is expected to keep up with the growing adoption. Industry analysts expect that XRP will get closer to $3 or even break above this level in 2023. Widespread adoption of XRP for remittance operations will play a major deal in reaching this level.

Algorithmic analysis points at XRP approaching the $4.50 level in 2025. From a fundamental perspective, Ripple’s XRP development might have to find support on further institutional adoption worldwide. Aside from partnerships in the United States, more deals in Europe and the Latam regions could boost the price evolution.

Needless to say, the year 2030 is still a long way from now. The future of XRP in the long run will focus merely on surpassing regulatory and adoption challenges.

With central bankers slowly accepting the idea of digital currencies and developing their own alternatives, we could see XRP taking a leadership role among banking and payment solutions, which obviously will push its value upwards. Under positive circumstances, XRP could be looking at a price level of $17 to $20 per unit by 2030.

There’s no doubt that XRP has a bright future in the long term. Buying XRP today can result in huge gains in only a matter of years. That said, relying on a single XRP prediction might not be a wise choice. XRP forecasts should serve as a reference for conducting your own analysis.

For further guidance on XRP price, we suggest trying Crypterium Price Predictions — a free, easy-to-use feature that offers daily predictions with an accuracy as high as 96%.