Over the past week, the price of Bitcoin has experienced significant fluctuations but eventually returned to previous levels above $19,000. The activity in the market began to decline, and this is evidenced by the decrease in trading volume of about $25 billion per day. Volatility also decreased and failed to exceed 5% per day this week.

This is despite the fact that there was significant news. Chief among them is that MicroStrategy has raised $650 million from qualified investors. They will receive the company’s debt with an interest rate of 0.75%. Previously, Microstrategy has already become known for purchasing over $400 million worth of Bitcoins from its own funds.

The new initiative did not go unnoticed by the crypto industry and banks. In particular, Citibank downgraded its recommendations on MicroStrategy shares. As a result, their value fell by 13.9%. All of this, despite the fact that back in November, Citibank predicted an increase in the value of bitcoin to $318,000.

Other big news this week also came from banks.

The largest bank in Singapore DBS Bank announced the launch of its own cryptocurrency exchange. It will support 4 fiat currencies – Japanese Yen, USD, Singaporean dollars, and Hong Kong dollars, as well as 4 cryptocurrencies – Bitcoin, Ethereum, Bitcoin Cash, XRP. Institutional companies and accredited investors will have access to the platform.

Another large bank in Spain, BBVA, plans to launch a service for exchanging and storing cryptocurrencies. Previously, they were already interested in blockchain, but now they decided to enter the crypto industry completely.

All of this suggests that institutional money has finally arrived in the cryptocurrency industry. There was a lot of talk about this and we have been waiting for this for almost 3 years. This moment has finally come and it is therefore not surprising that the price of Bitcoin continues its upward rally.

Other important news is the case of Alexander Vinnik, who was suspected of laundering over $4 billion through the former BTC-e exchange. Having a trial that lasted 3 years, he has ended up receiving 5 years in prison and a $100,000 fine. However, this news had practically no effect on the market. 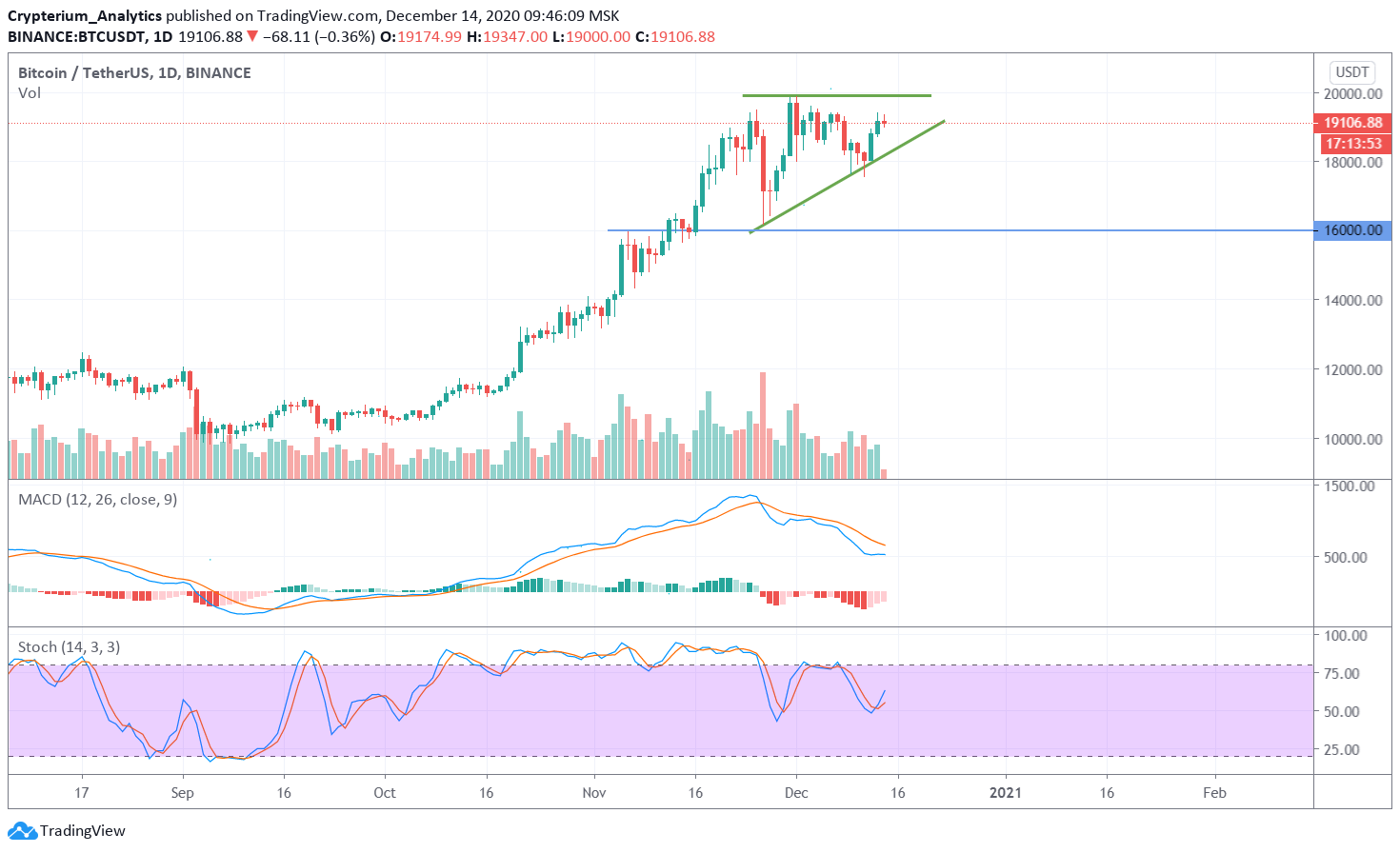 Bitcoin followed the second scenario – the price failed to gain a foothold below the $17,800 level and bounced back up. It is noteworthy that during the whole week Bitcoin declined, but on the weekend it went up.

In the event that the price fails to reach this key level, the chart will turn down and head towards $16,000. After that, we can see a transition to a downtrend for many months. This scenario will become relevant if Bitcoin consolidates below $18,000 on the daily timeframe.

This week should be the defining one because this is the last full trading week this year. Then the holidays begin. This means that many will start fixing positions now, which could lead to a collapse in all markets. Also, 3 years ago, it was during this period of time that we saw a decline from $20,000 to $11,000. It is possible that this scenario will repeat itself now.