Crypto Weekly: Bitcoin Grew to $42,000 and then Crashed

Over the past week, the price of Bitcoin has set many price highs. Bitcoin was worth $33,000 last Monday and is up 27% to $42,000 in just a week! However, yesterday the price began to fall, which continues to this day. The fall is already 20% of ATH and the price has broken through the $35,000 level.

One of the biggest events was the growth in the capitalization of the entire crypto market, which exceeded $1 trillion on January 7. This is a historic event for the crypto industry, which has been waiting for the last 3 years. However, it was not possible to keep this value for a long time, and already on January 10th, the capitalization of the crypto market again became less than a trillion dollars.

Also over the weekend, it became known that the CTO and founder of the EOS project, Daniel Larimer, is leaving the project. According to him, this was due to the loss of faith in “freedom as a service.” Now he is going to create new tools that will give people freedom. Larimer is one of the most famous crypto enthusiasts who has already created 3 large projects in the crypto space – BitShares, Steem and EOSio. Therefore, with a high degree of probability, we will soon see a new project from him.

Slightly less noticeable was the departure from the post of director of the Grayscale Investments cryptocurrency fund, which manages assets worth $25 billion. However, this departure is associated with a promotion, as the former CEO will take the position of director at the parent company Digital Currency Group.

Another big piece of news is that one of the largest banks in the world, Morgan Stanley, has acquired an 11% stake in MicroStrategy. Recall that this company is actively investing in Bitcoin and even issuing IOUs for the purchase of Bitcoin in the amount of $650 million. This means that the entire banking structure is interested Bitcoin, and a new inflow of money into it is inevitable.

There is a strong correction on the Bitcoin chart today. Let’s see if this means a transition to a downtrend or a decline to recruit a position to new ATH. 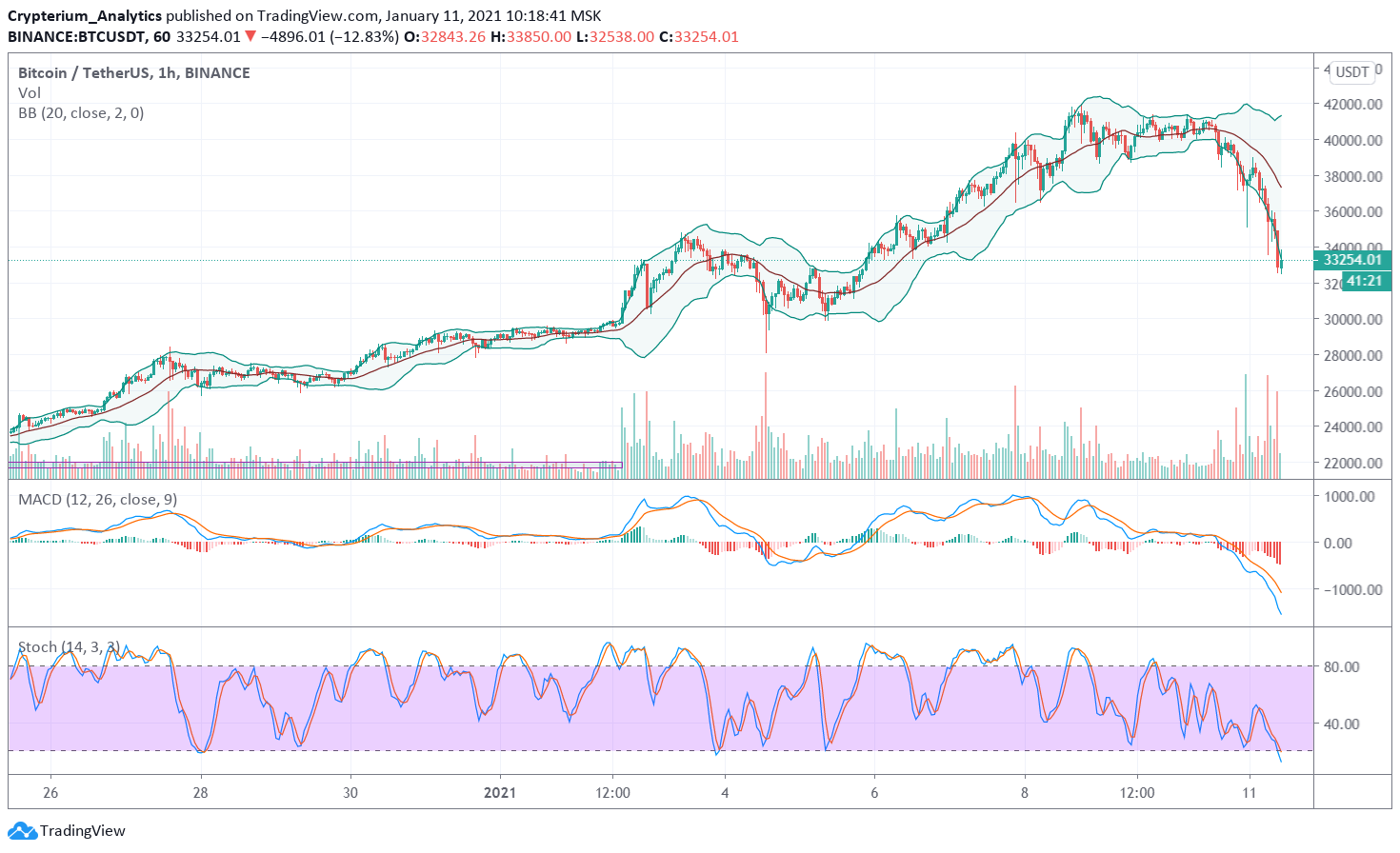 Now we see a steep drop in prices, which have already dropped by $8,000 per day. All indicators also show significant declines with no signs of a reversal. Despite the fact that some of them are in the oversold zone, there is still enough range and time for a further decline.

Most likely, the price will not go below $30,000, since there is a strong support level and a large number of stop-losses are near this level. Therefore, the price should not break this mark on the next day.

In the event that this happens, we do not recommend buying Bitcoin lower until the sheer drop ends. Bitcoin has shown more than once that it can fall by 50% – 70% within a few days. Therefore, now the best option would be to exit the position and wait for the market to stabilize.