Not only Game of Thrones came to an end this past May, but also the so-called lsquo;crypto winter’. The price of bitcoin has pushed remarkably higher in the last 30 days, with growth rates resembling of the good old days when one unit was worth nearly $20,000.

The price of the world’s most popular cryptocurrency has increased as much as 72 percent last month, jumping from $5,280 to reach a pick of $9,100 by the end of May. Looking at a wider timeframe, we see that bitcoin has already doubled in value since January. 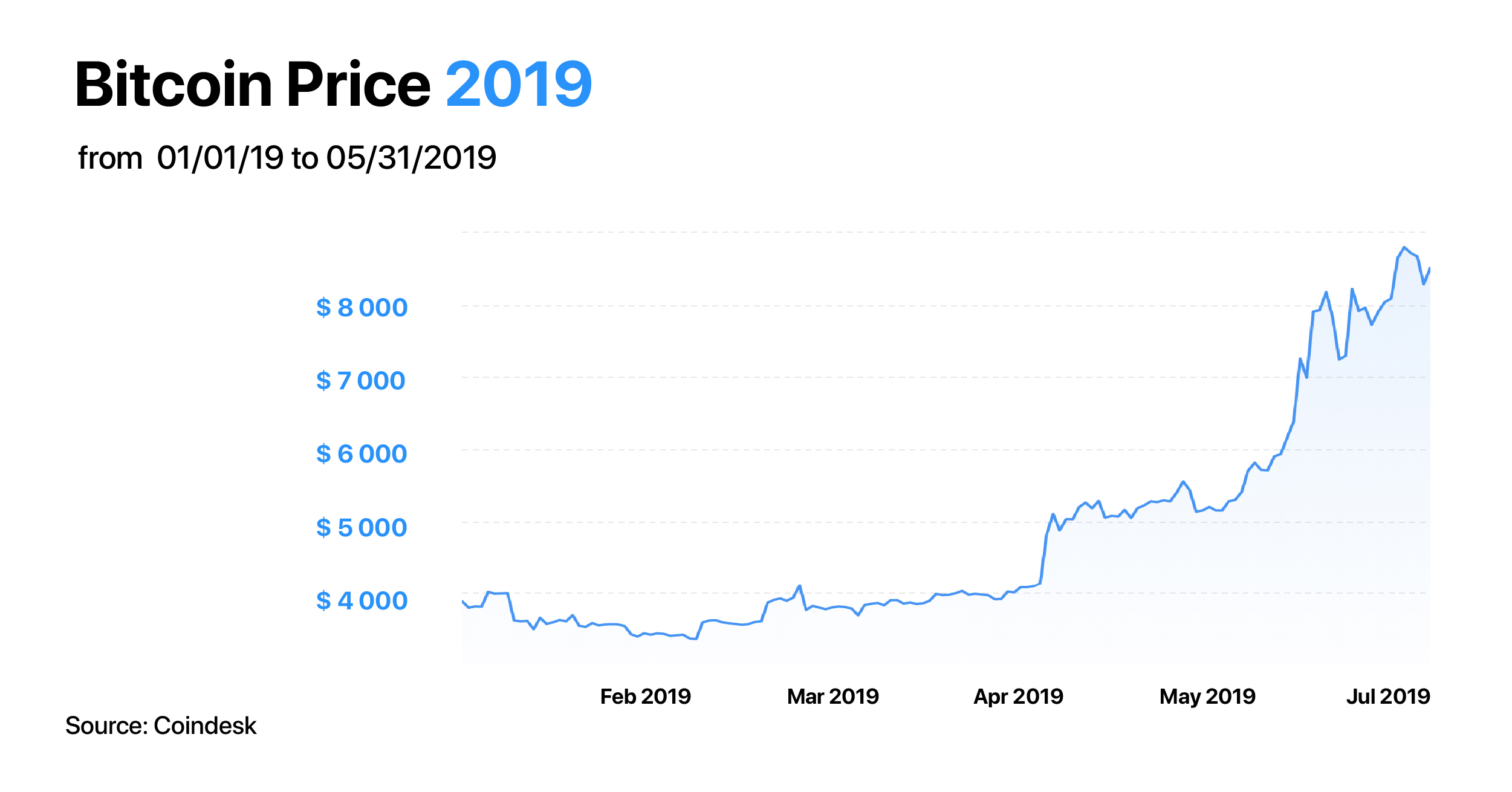 The bullish sentiment seems to be gaining momentum as the market continues to process the above-mentioned levels as the new normal. That said, social media activity might be a good way to outline the rising interest in this digital currency.

In the following chart, we illustrate the relationship between bitcoin’s price and the 30-day average tweet volume for this particular crypto asset. 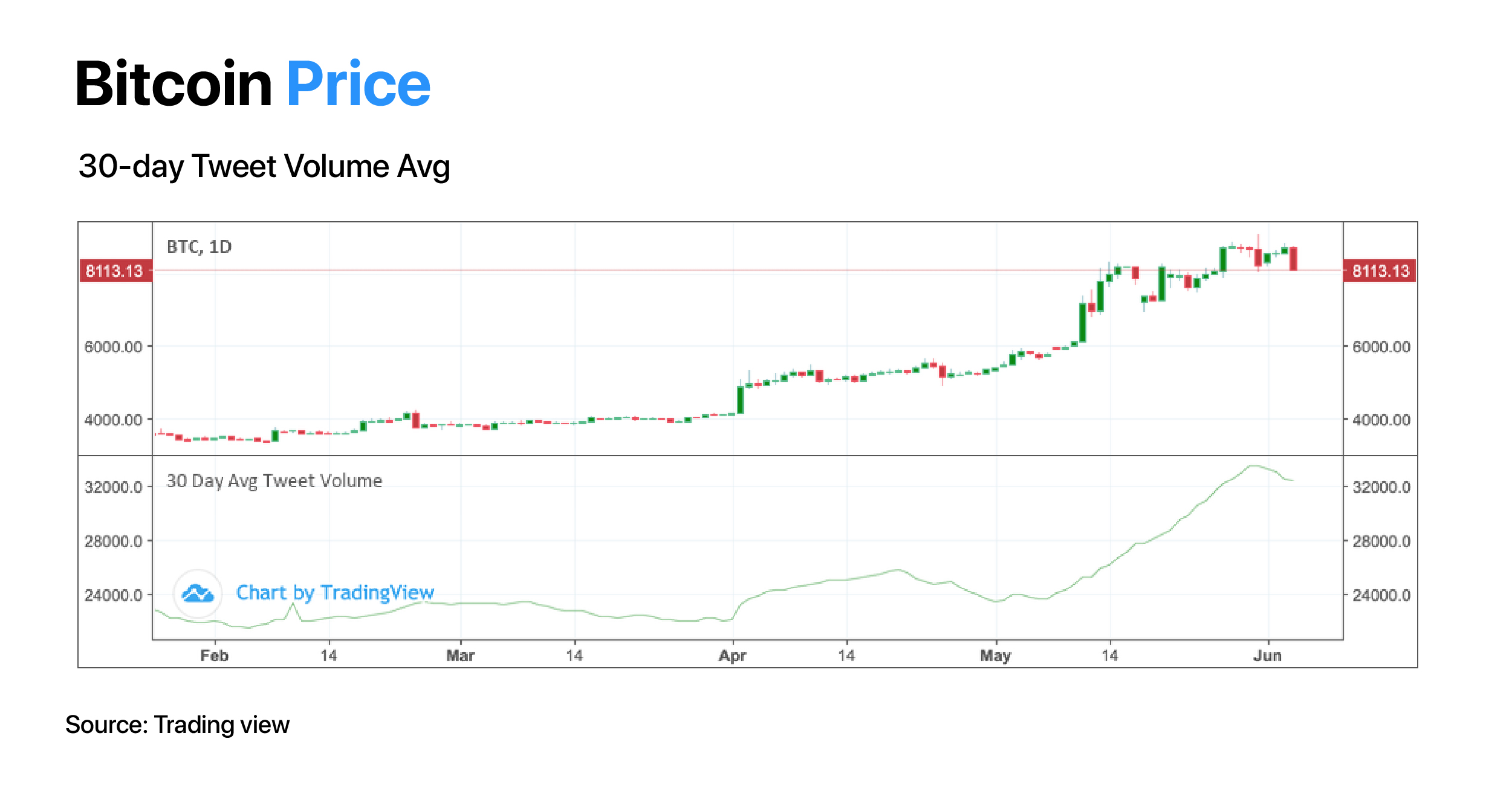 With bitcoin coming back to life after such a long wait, you are probably wondering what are the catalysts driving the price higher. Here are four reasons behind Bitcoin’s rally:

The next bitcoin halving is just around the corner. This event will reduce by half the number of bitcoins awarded to miners for adding new blocks into the bitcoin blockchain.

If history repeats itself, cutting the mining reward from 12.5 bitcoin to 6.25 bitcoin could trigger a massive growth for Satoshi’s cryptocurrency. This might well explain why an increasing number of people are again turning their eyes to bitcoin.

Bulls are certainly expecting that bitcoin halving 2020 bitcoin will positively impact the price and therefore, they’re taking advantage of the lsquo;low price’ to pack their portfolios.

Bitcoin halvings occur after every 210,000 blocks are mined. That’s usually about 4 years.

In 2012, the first bitcoin halving event took place, pushing the price to an all-time high of $1000. Four years later, the 2016 halvening boosted the digital currency to a substantial $19,000.

Regular people are not alone in recognizing the opportunities presented by Bitcoin and other cryptocurrencies. Organizations are also joining the hype and adding crypto into their portfolios.

Only last week, Fidelity released a survey showing 22 percent of investors already have some exposure to digital assets, while nearly half of them are open to incorporate cryptocurrencies to their portfolios in the next five years.

Fidelity is actually a great example of how big corporations are embracing cryptocurrencies. With over $7.6 trillion in client assets under management, Fidelity has recently launched a cryptocurrency custody service for clients and is already working on an investment service too.

But that’s just one example. Other traditional financial institutions are also developing new crypto-related services for their customers. Online stock brokerage company TD Ameritrade has announced their intention to step into the crypto world.

Back in April, Bloomberg reported E*Trade Financial Corp., one of the largest securities brokerages, is getting ready to enable cryptocurrency trading on its platform, starting with Bitcoin and Ethereum.

On the corporate front, some companies are adding cryptocurrencies as a payment method in order to keep up with customer demands. Texas-based telecom giant AT amp;T has started to accept payments in Bitcoin this month following a spike in adoption.

The holdings’ VP Kevin McDorman said: quot;We have customers who use cryptocurrency, and we are happy we can offer them a way to pay their bills with the method they prefer. quot;

Bitcoin is (finally) easy to use

There was a time when digital currencies were seen only as an investment, mainly because there wasn’t any easy, fast and affordable way to spend them. But that’s no longer the case.

A few months ago, cryptocurrency exchange Coinbase launched its own cryptocurrency card in the United Kingdom. The card solution, only available for UK residents, allows Coinbase users to spend Bitcoin on the go, without waiting for a bank withdrawal.

This is not the only solution in the market and certainly not the most competitive one. But Coinbase’s extensive user base has the power to increase awareness for such services.

The Crypterium Card is another big player in the Bitcoin prepaid card arena. Unlike the Coinbase Card, anyone can order Crypterium’s solution and start using Bitcoin, Ethereum, Litecoin, USDC seamlessly for everyday purchases, both online and offline.

The ongoing trade war between the United States and China has serious effects on national currencies. The intensifying political tension has already pressured down the Chinese yuan to a six-month low against the greenback.

A weaker yuan could make Chinese exports more competitive, but a prolonged devaluation also could trigger a capital outflow as a way to prevent value losses. In this sense, Chinese investors are considering Bitcoin and other digital currencies as a hedge.

“If you were in China and you wanted to diversify, it would seem logical that Bitcoin would be a short term alternative,” said Andy Brenner, Head of International Fixed Income at National Alliance Securities in an interview with CNBC. “

And while it is not possible to track who is actually buying bitcoin, the bid for bitcoin is aligned with a big downturn in the value of the Chinese yuan versus the dollar.