The past week has been rich in events in the crypto world. This also applies to Bitcoin, which continued its growth at Christmas and made many crypto enthusiasts happy. However, besides Bitcoin, many things have happened that will make us remember this week.

First of all, it is worth noting the new problems with Ripple. So, on December 23rd, the SEC filed a lawsuit against this company, as it believes that it was selling unregistered securities in the form of an XRP coin worth $1,5 billion to retail investors for 7 years. At the same time, part of the lawsuit relates to the founders of the company – Brad Garlinghouse and Chris Larsen.

This almost instantly affected the XRP price, which fell 60% in 1 day. And this led to the fall of the entire altcoin market since such a claim could at any time touch every coin. Many crypto exchanges and services have announced that they are stopping XRP trading or are going to delist. This could be called a disastrous day for Ripple.

It’s worth noting that this lawsuit was filed by SEC Commissioner Jay Clayton, who resigned a few days later. This person was skeptical against cryptocurrencies and won lawsuits against many large projects – Telegram, EOS, Libra, etc. In addition, it was he who was the main opponent of the creation of cryptocurrency ETFs. The XRP lawsuit was his last statement and will be remembered for a long time.

Some crypto exchanges were not doing well this week. EXMO, the largest Eastern European exchange, has been hacked. Cryptocurrencies worth $10,5 million were withdrawn from her hot wallets, which is 6% of the total exchange funds. At the moment, the funds have not been returned, but the exchange has already turned to the police and the CipherTrace company, which should help track the funds.

The second exchange that had problems was Livecoin. At first, anomalies in the form of high prices arose there – the price of Bitcoin rose to $220,000, ETH – to $6,500. And then more than 100 Bitcoins were withdrawn from the exchange. Some people suspect Livecoin of exit scam. The company itself claims that they have been hit by a long hacker attack and have lost control of their servers.

And the last big negative news is connected with Ledger. So, a database of 1 million Ledger wallet owners got into the network, which contains mailboxes, phone numbers, and even addresses. And after that, many owners of this hardware wallet began to receive threats from intruders. The company itself says that this is the same base that was stolen in June 2020. And only now there was a buyer on the darknet who bought it.

The good news came from the DEX exchange aggregator – 1inch. The project team launched their own control token, which they distributed via an airdrop to those who previously used their aggregator. At the time of entering the exchange, the token has risen in price 12 times to $3. At the moment, the cost of the token is $1,20.

Now let’s see what happened to Bitcoin and what to expect from it next: 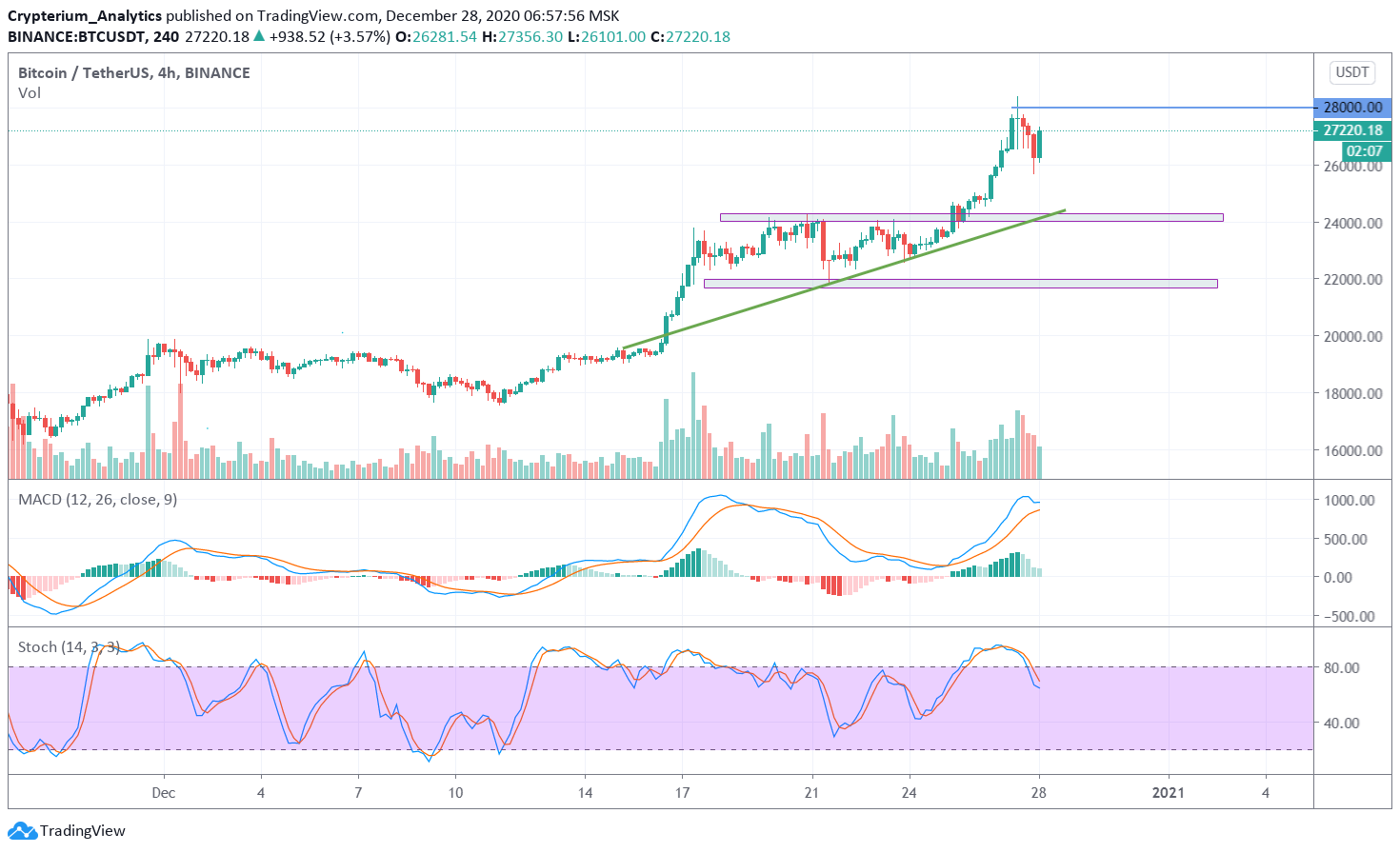 Last Monday, we assumed Bitcoin would hit $26,000 – $27,000 and our prediction was correct. During the growth, we saw massive liquidations on Bitcoin, which amounted to half a billion dollars.

It is difficult to say where Bitcoin will head next, but the range of $28,000 – $28,500 can be noted. If the chart can gain a foothold at this level, then we will see a breakthrough to $30,000. And this is where the biggest resistance will be. Many analysts and traders predicted growth to exactly this mark, so that is where the next major fixations will be.

But you need to be careful this week because now is the end of the year and we may see a significant reduction in positions, which will lead to a collapse in prices. Of course, the trend is now clearly upward, but your position should be protected with stop-losses. Trading altcoins is also dangerous now. So far, the altseason has not begun and any trades with them are more risky.