Are We Really Going’Cashless’? Think Twice

For many of us, paying with a debit or credit card is no big deal. Coffee? Swipe it. Supermarket? Swipe it. Bus? Whatever you want, all you have to do is swipe it! Paying with cards is easy, safe and it allows us to move around the city without those bulky wallets full of cash in our back pockets. But how close are we really from a lsquo;cashless society’?

In some developed countries, especially Scandinavian ones, the idea of leaving cash behind has been gaining traction rapidly. Sweden is a perfect example of how civil society and businesses are moving towards a cashless reality.

Last year, a nationwide research conducted by Sweden’s Central Bank Riksbank showed that almost all transactions made by Swedes in 2018 have been processed digitally, either by swiping their debit/credit cards, using contactless technology (NFC), or relying on mobile applications, such as Apple Pay, Google Pay or Swish. Oh, haven’t you heard of that one?

Back in 2012, Sweden’s top six countries came together to introduce Swish mdash; a mobile payment app that enables instant digital transfers peer to peer and peer to business. While the app has established itself as a convenient payment method, it only works locally.

According to the same study, only 13 percent of Swedes reported using paper money in recent purchases, down from a 40 percent registered in 2010.

In line with this findings, the research also highlights a sharp reduction in cash withdrawals from ATMs. Nearly 20 percent of responders said they never withdraw cash in the past twelve months, while 42 percent said they visit ATMs less often than once a month. 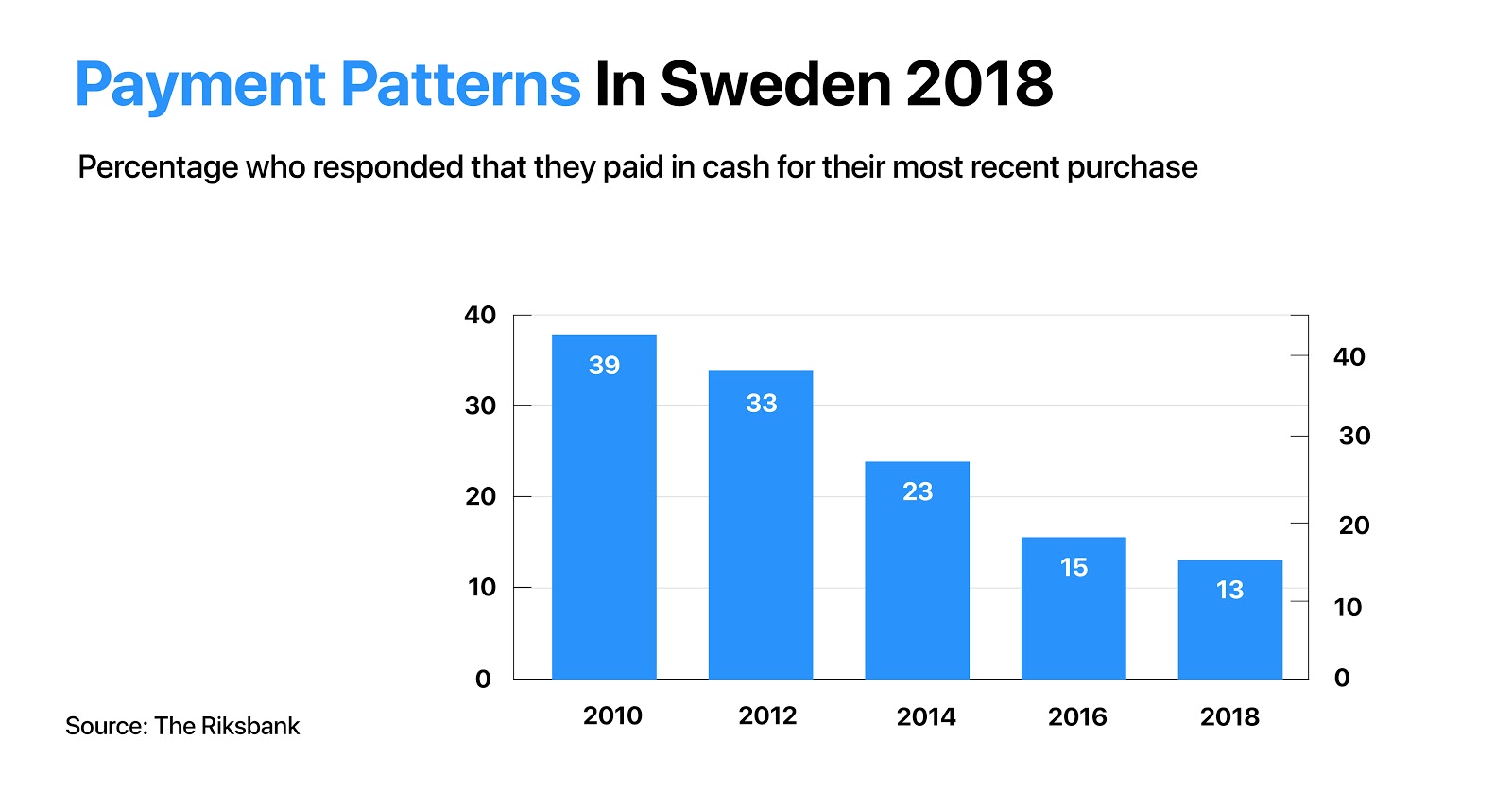 Niklas Arvidsson, an associate professor of industrial dynamics at the Royal Institute of Technology (KTH) predicted that Sweden will become the first cashless economy in 2023. But Sweden is not alone in the cash-free race. Norway, Finland, Iceland and Denmark are also on the same path to replace physical money with digital.

Regrettably, the way the Nordics are embracing cashless solutions for their everyday lives is in high contrast with other countries’ relation to money.

As it turns out, cash continues to be the go-to payment choice in 75% percent of countries. The lsquo;World Cash Report 2018‘ by G4S pointed out that nearly half of financial transactions in these nations are made in paper money.

To measure to the relevance of cash in societies, researchers matched Cash In Circulation with local GDPs. South America remains on top when it comes to cash dependency, followed by Africa, whereas Asia and Oceania are the lowest cash-oriented regions.

Cash dependency is largely linked to culture and available payment options. In Latin America, a history of banking crisis, government defaults and the current lack of quality financial services and digital tools seem to explain why cash is king among South American consumers.

No wonder Latin America and the Caribbean is home to more than 20% of the world’s two-billion people without access the traditional financial system, as known as lsquo;the unbanked’. In 2018, the Central Bank of Brazil released a study proving that over half of the country’s active population receives salaries in cash.

There is more. A report by Brazilian Service to Support Micro and Small Enterprises showed that 60% of Brazilian businesses do not have POS terminals to accept card payments. In other words, only 2 in 5 merchants would let use a bank card to pay for goods.

According to the World Bank’s Global Findex Report 2017, the three most commonly cited barriers to open bank accounts was lack of enough money, no need for it and their cost. 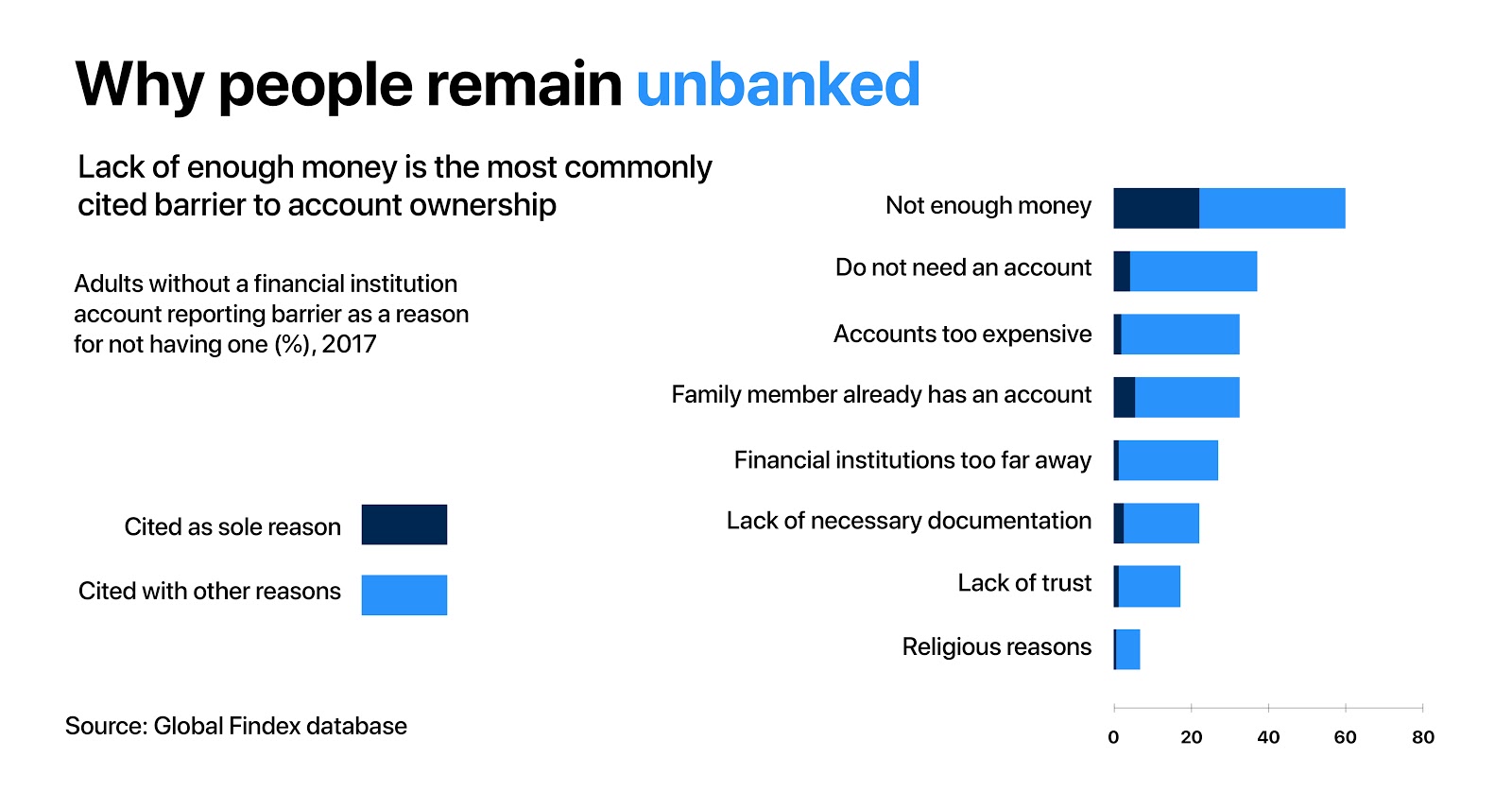 From all regions, the share of responders reporting that bank accounts are too expensive was twice as high in LATAM. In Brazil, Colombia, and Peru almost 60 percent cited cost as a barrier. Distance also plays an important role as 22 percent of unbanked adults said that financial institutions are too far away.

In this regard, Ashley Almanza, Group Chief Executive at G4S said:

“People trust cash; it’s free to use and readily available for consumers, it’s confidential, it can’t be hacked and it doesn’t run out of battery power – these unique qualities continue to hold significant value to people living on all continents.”

Cash Doesn’t Cut It Anymore, And Central Bankers Know It

One of the strongest pro-cash arguments is the fact that physical money is fundamental to financial inclusion. But is it really? Cash lets everyone to execute financial transactions. From buying a Coke in a kiosko to paying your taxes. However, financial inclusion is about so much more than that. For example, access to investment tools and lending solutions. 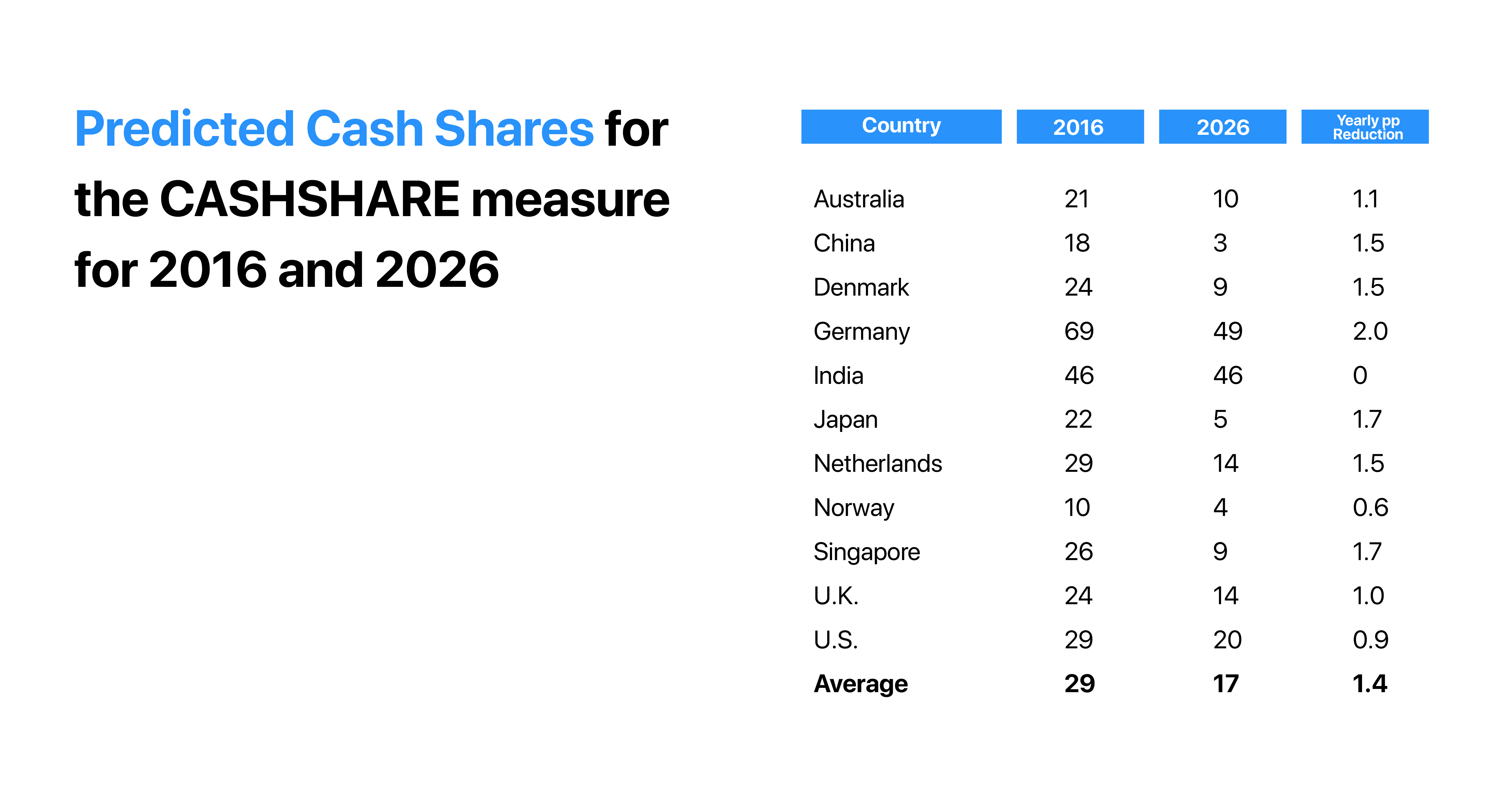 “Let me start with financial inclusion, where digital currency offers great promise, through its ability to reach people and businesses in remote and marginalized regions. We know that banks are not exactly rushing to serve poor and rural populations.”

In this context, digitalization offers unique opportunities. World Bank data shows that two-thirds of the total underbanked population owns a mobile phone. Thanks to innovative banks for digital currencies, such as Crypterium, these people not only have access to a safe, affordable account to deposit their funds, but also financial services like low-fee global payment cards, loans, saving accounts and investment products.

Central banks, on the other side of the story, might also very well benefit from moving to a cashless society. Printing of physical money is a big expense for central banks. One that, in certain cases, can cost up to 1.5 percent of a country’s GDP.

An IMF working paper suggested there are two key benefits of digital currencies:

As you could expect, Sweden is not losing any time in this area. The Central Bank is planning to test its own digital currency: the e-Krona. The pilot is set to start in 2019.

Undoubtedly, taking cash out of people lives, governments, and businesses and replacing it with digital versions of it offer a long list of benefits, such as enhanced security, higher convenience and efficiency and lower costs. But to make it happen, there are plenty of challenges to be overcome.

How to reach locations with poor internet connectivity? How to help the elderly move into a digital environment without dealing with frustration? These and many other questions need to be answered to ensure a full and responsible adoption of digital solutions.

“We need to pause and think about whether this is good or bad, and not just sit back and let it happen. If cash disappears, that would be a big change, with major implications for society and the economy,” said Mats Dill eacute;n, Head of a Swedish Parliamentary committee.

All in all, bets are on the side of a cashless world, but the integration and implementation of digital payment technologies is likely to be carried out gradually. That said, we say with confidence that we’re heading to a less-cash reality with hopes of a cashless one.