What is Tokenomics: All Common Questions Answered

Every project in the crypto sphere would be incomplete without its own native token – the cryptocurrency that fuels inner processes and serves to reward users. Did you know that having a token in place requires developing so-called ‘tokenomics’? If that sounds vaguely familiar to you, read our guide on tokenomics definition with all essential aspects covered.

What is Tokenomics in Crypto?

When you know that the word is a blend of “token” and “economics”, tokenomics meaning becomes clearer. This is a complex set of rules regarding how a project’s inner currency will be distributed, spent, etc. Tokenomics covers everything from how many tokens are in supply to such aspects as the utility of the asset.

As a rule, crypto tokenomics cover:

Tokenomics is an important part of a project to consider because it defines the economic viability of a business. Crypto projects with well-developed incentives are likely to last longer and generate more rewards for both users and investors. Owners, in their turn, can rest assured about a steady flow of investors and enjoy token price growth.

Who introduced the notion of Tokenomics?

The term ‘tokenomics’ was first mentioned in 1972 by B.F. Skinner, a psychologist from Harvard, who came up with this economic model. He claimed that tokenomics could help companies control human behavior, while digitalization of value would lead to positive changes.

Now as you know what is tokenomics in cryptocurrency, we should discuss its importance for businesses and investors.

Why is it important?

Tokenomics is equally important for:

Finally, tokenomics explains how the project creators plan to increase token value, and what can fuel the price growth.

How to Evaluate Tokenomics?

No one wants to invest in failing crypto companies, so understanding tokenomics is essential for any crypto enthusiast. When researching a crypto project, consider the following essential factors:

Also, if you are researching a new project that has not been released yet, look at their funding goal (the minimum fundraising cap if they are running an IDO). If the project has been released recently, check out the amount of raised funds – that displays investors’ real interest.

Let us show you a few examples of famous projects’ tokenomics so you could see what this financial model can include. Tokenomics are usually described in whitepapers or on websites.

The Safemoon project has in-depth developed tokenomics that reflects not only numbers (total supply, fees, distribution), but also financial processes, such as token burning, extra rewards, and deductions to a liquidity pool. 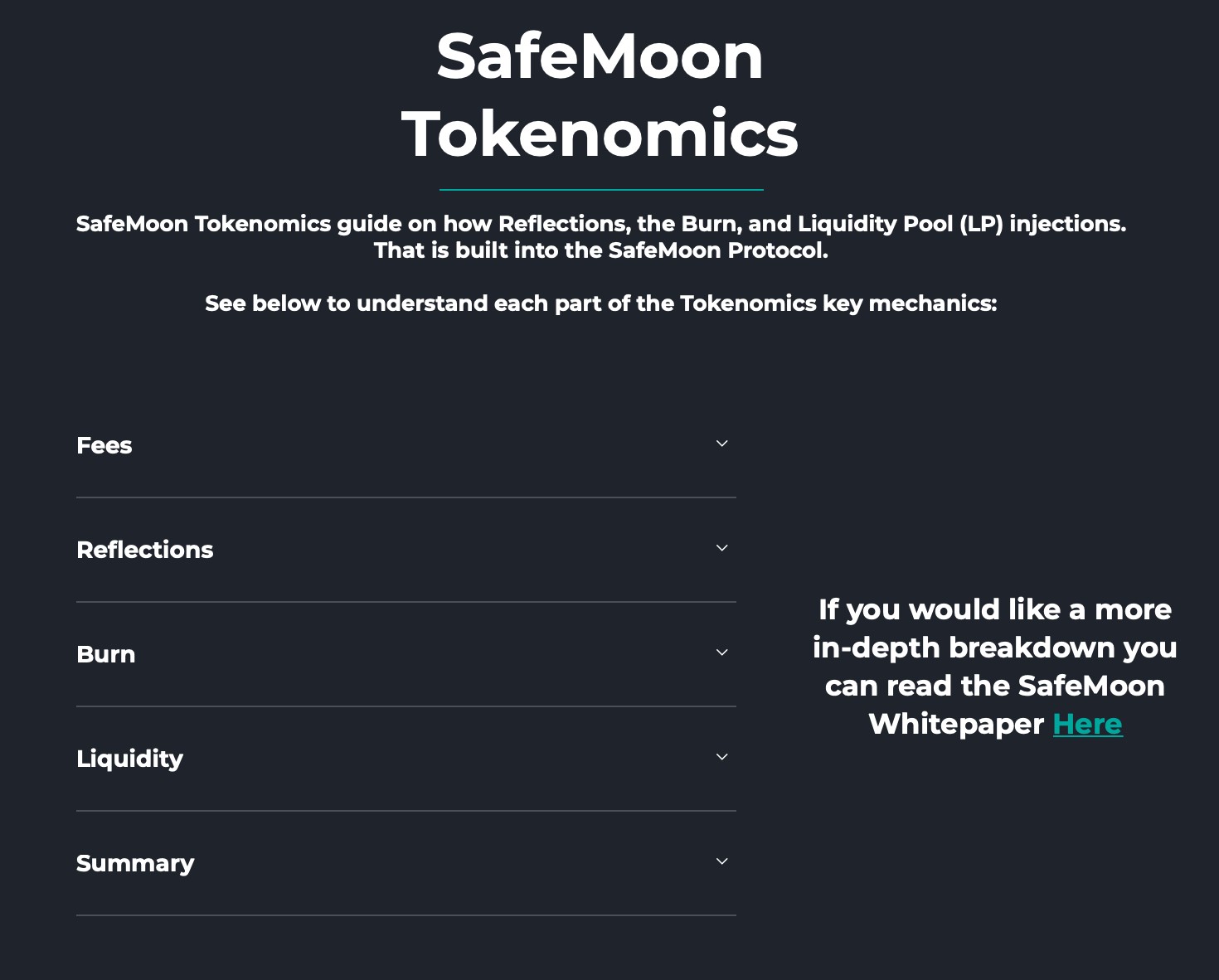 Starting with the total supply of 1 quadrillion tokens (!), Safemoon burned 22% of the supply at the launch. The project has an unusual transaction taxation – it charges a 10% fee split in two ways:

This scheme turned out to be profitable at early stages of Safemoon existence, but the token price did not make it close to ATH after short-term success.

When it comes to Dogecoin, this is an inflationary token because the supply is unlimited, and 100% of coins are in circulation. As of August 2022, there are 132 bln DOGE tokens circulating with the market cap exceeding $9 bln. Such a tokenomics model keeps the price of tokens low because of growing supply and limited demand.

Tokenomics is a set of rules that comprise a financial model of a project’s inner currency. It describes how many tokens will be released in total, how they are distributed among the team members, users and investors, all transaction fees, and other processes related (burning, emission).

How does tokenomics work?

Tokenomics rules can be implemented right in the project’s smart contract. It will automatically change fees, distribute rewards and send tokens to liquidity pools. If the tokenomics model is well thought-through and people keep investing in the project, the token price will grow.

In what way is tokenomics useful for a project?

It allows the project team to maintain economic integrity and ensure coin price growth in the long haul. Besides, it shows investors the transparency of financial processes.