Against the backdrop of this fall, trading volume jumped 50% to $55 billion per day. It also provoked a strong drop in altcoins, which fell in value 2-3 times more than Bitcoin. As a result, Bitcoin’s dominance increased from 45.1% to 46.6% overnight.

We decided to take a look at the Bitcoin chart and take a close look at what to expect from the first cryptocurrency in the near future: 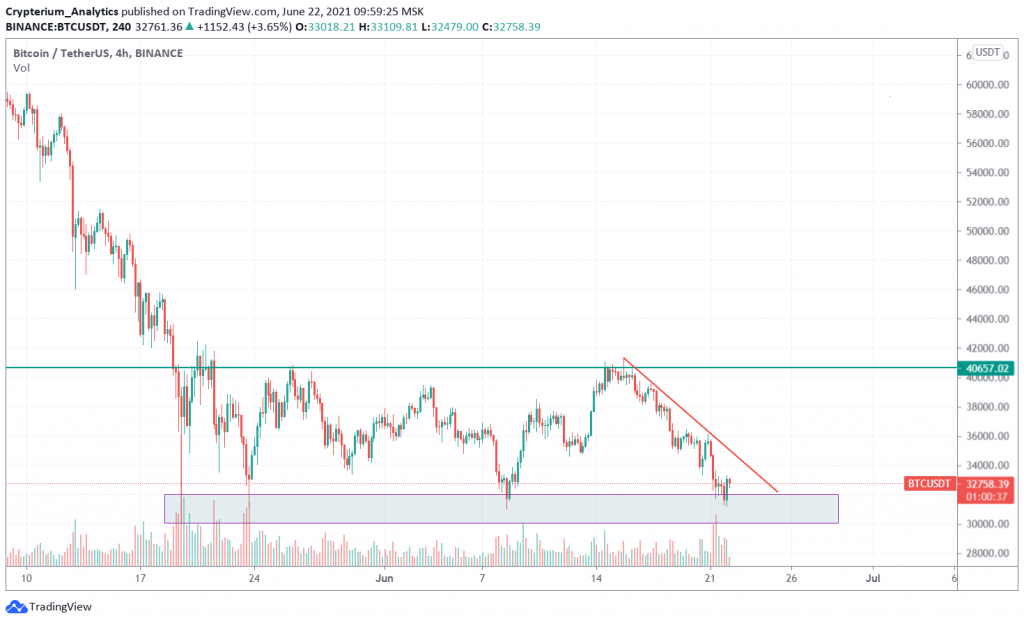 For more than a month, the Bitcoin chart has been moving between the $30,000 and $40,000 levels. This is a rather long sideways movement, during which the price touched the upper and lower borders several times. Yesterday, the chart dropped to $31,000 again. At the same time, you can notice a slight increase in volumes, which is a bad sign. This indicates that the liquidity gained during the positive news of the past weeks has left the market.

The $30,000 – $32,000 range is key at the moment. Depending on how market participants behave, it will become clear whether the market has entered a downtrend or not. That is why we note the fact that yesterday’s candles on the 4-hour timeframe have a negative structure. This is due to the fact that in past times the price bounced up quickly and the candles had small bodies. This time it’s exactly the opposite.

In addition, over the last week, the price has moved into a downtrend, which we have shown with a red line. In the course of it, Bitcoin has already dropped by $10,000 or 25%. Perhaps, today or tomorrow we will see a bounce up to the $34,000 – $35,000 levels. In this case, the downtrend may be interrupted and we will see a new upward movement.

However, there are few prerequisites for this. First of all, due to the fact that the market activity has significantly decreased and the news does not greatly affect it. This indicates a period of market weakness and at such times the price can move in almost any direction. That is why we recommend actively joining the trade only if the price breaks through either $30,000 or $40,000.

The situation with altcoins looks even worse. Many of them have lost 70% – 80% of their value from the spring highs. The altcoin season was very powerful and the fall after it left many market participants in strong drawdowns. It is practically contraindicated to trade altcoins at the moment since with any movement of Bitcoin they lose in value. But nevertheless, you can use our AI Price Predictions feature to get a more accurate forecast of altcoin price movements.