Over the last 24 hours, the price of the first cryptocurrency has remained almost unchanged and continued to stay above the $57,000 mark. At the same time, the trading volume decreased and amounted to $31 billion per day. However, the rest of the market experienced a slight increase causing the Bitcoin market dominance to decline to 42%.

Let’s take a look at the Bitcoin chart and try to predict the direction the first cryptocurrency may move to in the coming days: 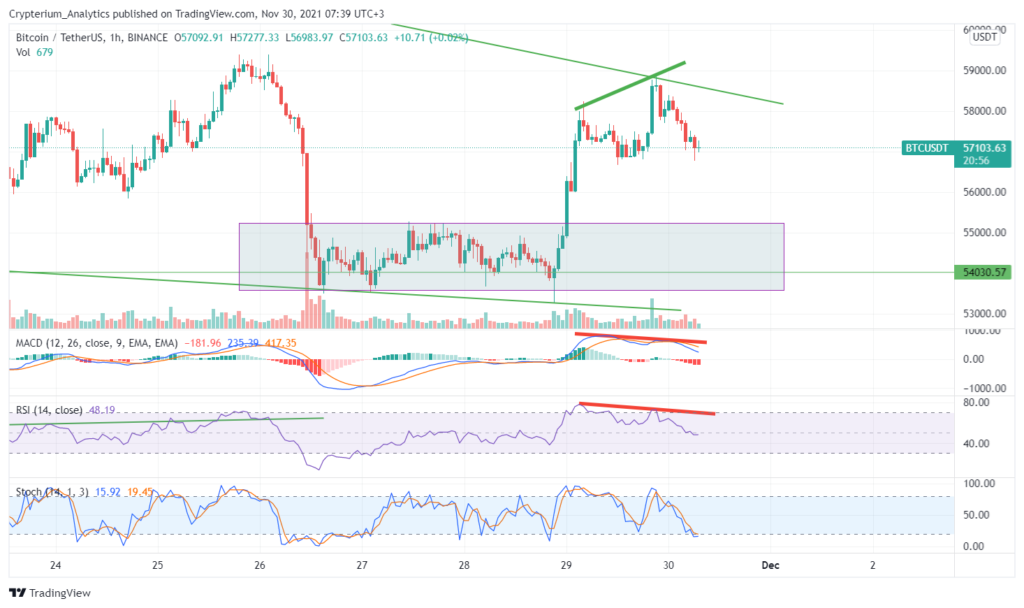 Last weekend, the BTC price stayed in the $53,500 – $55,200 area for a long time. If we take a look at the 1-hour chart, this zone appears to be more obvious. Earlier, we noted that the $54,000 level would be the key level for Bitcoin and we expected the asset to stop there. Our assumptions turned out to be correct.

Over the past two days, the price of Bitcoin has risen by almost 6% from $54,000 to $57,000. Meanwhile, the chart moved even higher and briefly touched $58,500 yesterday. The price hit the upper border of the falling wedge and bounced down. The buyers were unable to overcome this area on the first try.

As a result, on the 1-hour chart, there is a gap that was formed between the price direction line and the oscillators. Thus, the RSI indicator proves a progressive Bitcoin decrease, while the chart is updating its tops. The situation is quite similar to the MACD indicator, which signals a probable decline. Both these signs reinforce each other and indicate bearish divergence.

This means that the price of the first cryptocurrency may plunge today. Taking into account the already existing patterns, Bitcoin can fall by 3-4% in the ​​$55,000 area, which is also the reversal zone that has formed over the past weekend. This only confirms the high probability of the described outcome.

Nevertheless, it should be noted that this scenario is local. If you look at the daily chart, you may see the price still moving within a descending wedge. This suggests a strong potential reversal for Bitcoin this week. The main obstacle is the $58,000 level. When the chart is consolidated above it, then Bitcoin may soar by 8-10% to $63,000.