Over the past 24 hours, the Bitcoin price has grown by 1.5% and the cryptocurrency is now trading at about $47,500 per coin. The trading volume has not exceeded $30 billion per day yet. Yesterday, altcoins demonstrated exactly the same dynamics as that of Bitcoin and repeated its entire movement. This indicates that all the attention is now paid to the first cryptocurrency.

Therefore, let’s take a look at the BTC chart and try to figure out what may happen to it prior to the New Year: 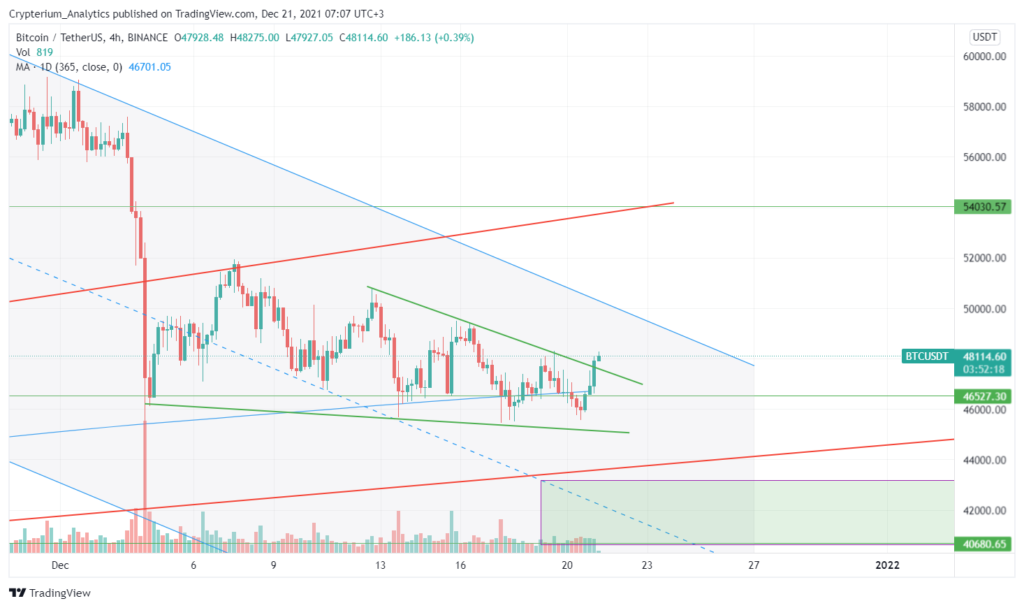 Yesterday morning, the Bitcoin chart declined to $45,558. However, by the opening of the American session, buyers have quickly returned the price to even above the level recorded on December 19th, which augurs well for the further uptrend. Moreover, there is a significant power on the chart when you look at the candlestick patterns. There has never been such a confident rise in December. Most likely, this movement will continue in the future.

After falling on December 4th, Bitcoin started a sideways movement and its price declined slowly. If you look at the chart carefully, you will see the pronounced waves, which form a falling wedge or a reversal pattern as it is known in technical analysis. Moreover, today the price managed to break the upper border of this wedge and consolidate above it in the 4-hour timeframe. This is a very strong signal for Bitcoin.

Also yesterday, Bitcoin dropped below the annual moving average for the first time ever, but after a few hours the price recovered and settled above it confidently. Thus, the MA365 line acted as a good support level for the chart. By the way, you can see that Bitcoin bounced off several times in the last 2 weeks, which made it possible to form a fairly strong level for buyers.

Now, there is a small room for growth that has opened for the chart. The Bitcoin price will tend to surpass the upper border of the descending channel. As for the present moment, it sits around the important psychological mark of $50,000. Most likely, this is where the fight between bulls and bears will unfold in the next couple of days. Considering all of the above mentioned signs, buyers have every chance to overcome this level and push the Bitcoin price even higher.