Over the past 24 hours, the Bitcoin price has decreased by 3.5% and has consolidated below the important psychological mark of $50,000. As we expected, the price had dropped to the $47,000 – $48,000 area and had met a strong resistance there. Buyers did not let the price fall any further and now they feel quite confident while holding this level.

Altcoins followed Bitcoin and also dropped by 4-6%. So, Ethereum  was the asset that lost 6% of its value and the cryptocurrency is now trading at about $3,800 per coin. Let’s take a look at the ETH chart and try to understand where it may move in the near future: 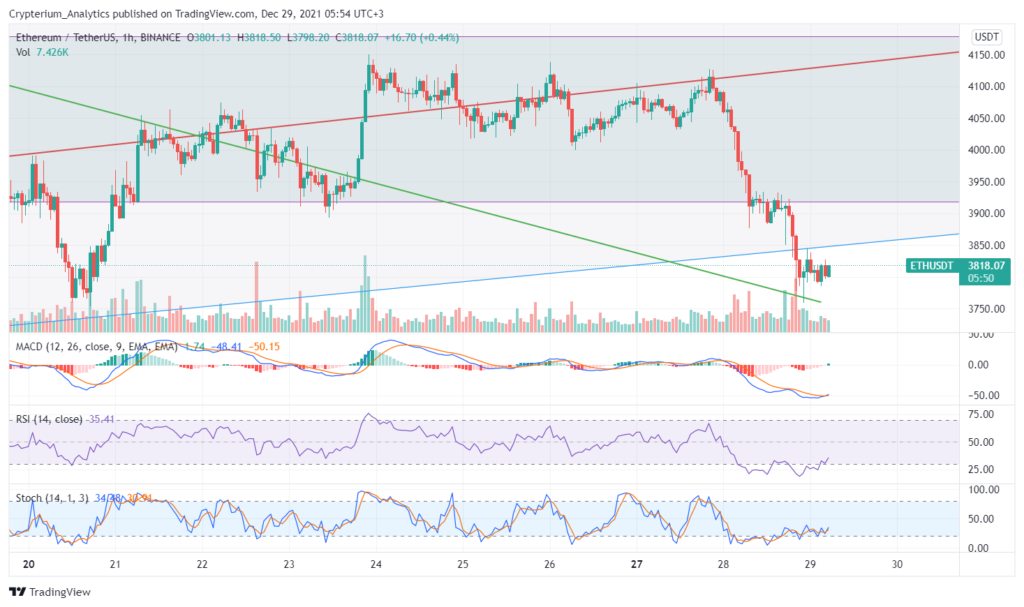 Over the past 2 days, the price of Ethereum has dropped by almost 9% and has gained a foothold below $4,000. First, the chart reached the lower boundary of the support block at $3,900 and stood there for a few hours. Then the asset went further down to the lower border of the ascending channel and eventually broke it.

Meanwhile, Ethereum dropped to the upper border of the falling wedge at the $3,750 level. Recall that the price bounced back up from here almost a week ago. Now, we are witnessing a classic retest, which only proves the strength of this pattern. It can be clearly seen from the chart that the $3,800 zone is key and this is where the future of Ethereum will be defined.

In the hourly timeframe, you can find that many indicators have already dropped down significantly. So, the RSI plunged to the oversold zone and formed a slight convergence. MACD has crashed to the bottom of zero where it has stayed for a long time. Stochastic signals for the oversold conditions as well while trying to turn up at the same time.

All this tells us that Ethereum is now fluctuating around the important level, which will determine the next price movement. Along with that, there have already been many signs indicating potential reversal. Therefore, we expect to see Ethereum hitting $4,000 again before the New Year. This means the chart will grow by about 6-7%, down from the current figure.