This can be judged by the trading volume, which even decreased slightly and amounted to $28 billion per day.

The yesterday’s market growth mainly affected Bitcoin. Altcoins remained either neutral or showed almost no increase. One of these assets was Ethereum, the price of which rose by only 1.5%. Let’s analyze the chart to understand whether we should expect the second popular cryptocurrency to grow in the coming weeks: 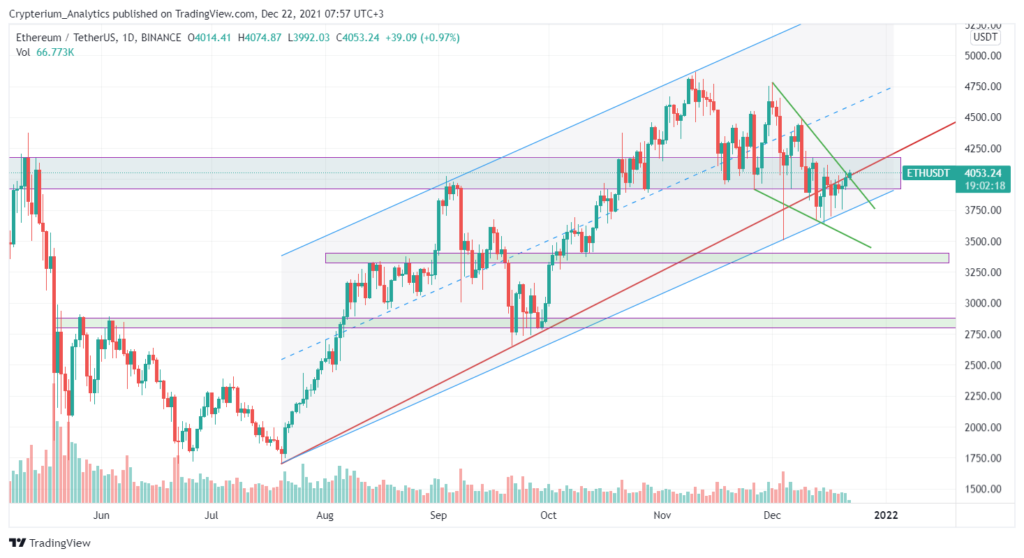 Ethereum continues to move within the ascending channel. For the last 2 weeks, the price has been constantly testing the lower border of the figure, however, buyers returned the price to the uptrend quickly. Thus, a strong support level was formed in the $3,650 – $3,850 area. This is a positive signal for Ethereum.

During the market crash on the night of 3-4 December, the price dropped below the uptrend line, which is marked red on the chart. This very day, Ethereum managed to recover to almost original values. But in the last 2 weeks, the chart dropped below this line again and gained a foothold below it. Yesterday’s daily candle rose and closed, barely reaching the trend line. As of today, the price keeps rising and now Ethereum sits at around $4,050. If the chart remains at this level until the end of the day, then we may see the cryptocurrency consolidating above it and then returning to an uptrend.

The possibility that Ethereum will rise in the near future has become significantly higher in the past few days. Thus, a falling wedge pattern has been formed on the chart, which is a well-known sign of upcoming reversal. Today, the oud price broke the upper border of this figure and it is trying to gain a foothold above it at the present moment. In case of this scenario, there will be great prospects for a new cycle of Ethereum’s growth. So, if this pattern works itself out, the price may rise to $4,800, where we can see the middle line of the ascending channel.

This means that Ethereum will probably tend to this level in the next 1-2 weeks and will reach a historical high again by the New Year.