The past week was full of events, the main of which was the breaking of the $20,000 mark by Bitcoin. This was expected for 3 long years, starting in December 2017. Moreover, the price set new historical highs day by day, and trading volumes also grew to record values.

At the same time, a lot of news came, not only from Bitcoin, but also from other sources.

First of all, it became known that the largest US cryptocurrency company and exchange, Coinbase, will conduct a direct listing on the stock exchange and Goldman Sachs will be the underwriter. According to analyst firm Messari, Coinbase has a current value of $28 billion. Just when the entry to the stock exchange will take place has not yet been specified.

Paxos has held a new round of funding for Series C, during which it raised $142 million. The money will be used to create and develop new infrastructure products. One of the investors is PayPal, which is working with Paxos to buy and sell cryptocurrency for its users.

Moreover, the influx of institutional money into Bitcoin continues to increase. This week, two large investment companies, Ruffer Investments and Jefferies, bought Bitcoin at once. The former did it in the amount of $740 million (2.7% of the funds under management), and the purchase amount of the latter is unknown, but is about 5% of the total funds under the management of the company ($51 billion).

Just like 3 years ago, the largest commodity exchanges have remembered the existence of the crypto market. So, CME announced that it is going to add Ethereum futures to its platform on February 8th, 2021. CBOE wants to launch a whole line of cryptocurrency indices suitable for future ETFs. Recall that at the beginning of December 2017, both of these exchanges added Bitcoin futures, which was one of the reasons for the rise of the first coin to $20,000 during that period.

It also became known that the trustee of the Mt.Gox exchange, which holds $2.7 billion worth of Bitcoins, has finally filed a plan to refund investors to the court. However, the details of this document are kept secret and not released to the public.

Now let’s see what happened to Bitcoin this week and what to expect in the coming days: 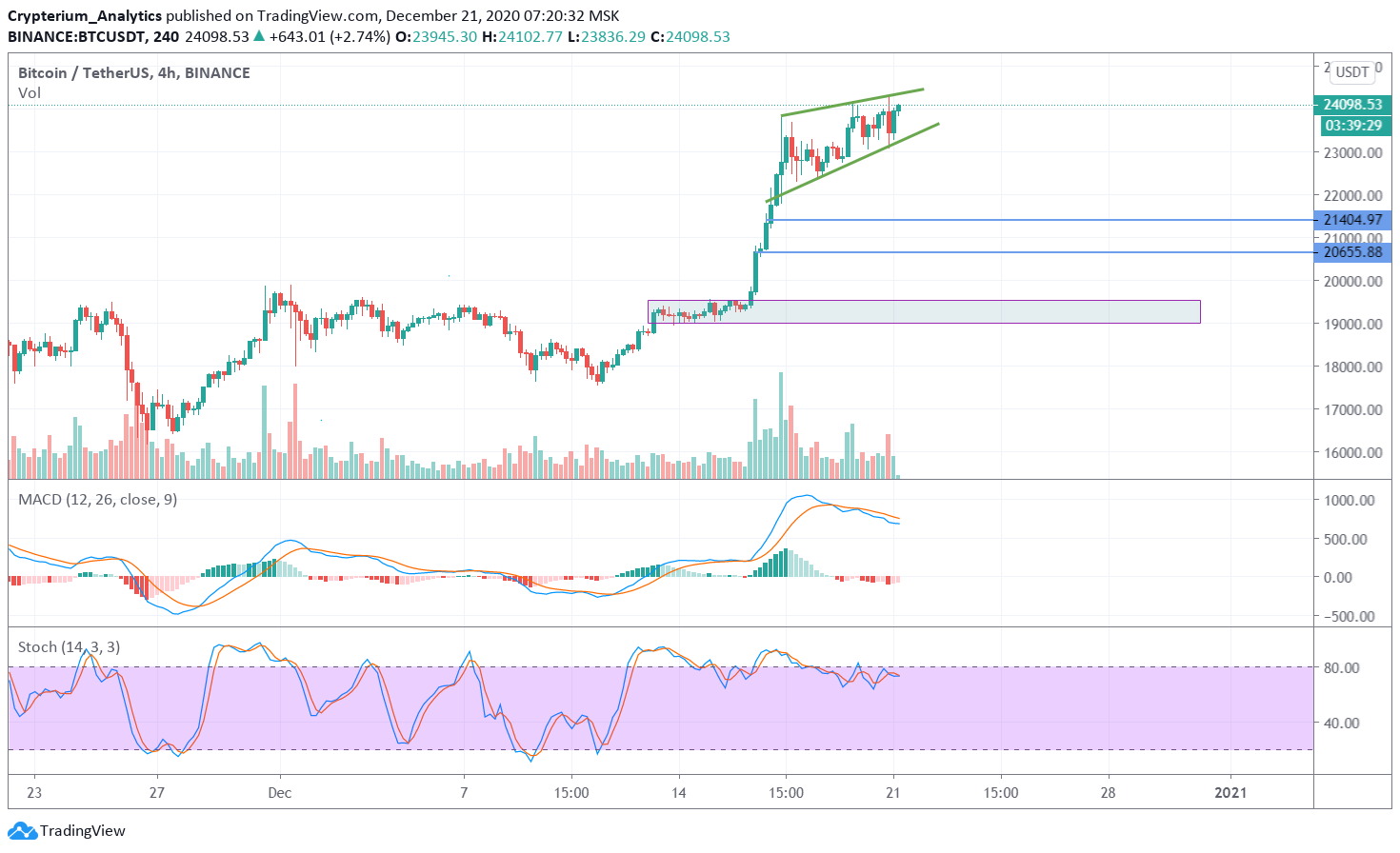 The $20,000 breakout caused a massive stir among the entire crypto community and beyond. Many people have re-started their interest in Bitcoin and what it is. This is confirmed by the trading volume, which became one of the highest in history at $72 billion per day.

However, many traders were disappointed – those who shorted Bitcoin. In just 2 days, December 16th-17th, positions totaling over $1.2 billion were liquidated. It also helped drive the price up.

On the daily timeframe, all indicators turned up sharply and also broke through their highs. At the beginning of last week it seemed that there were signs of a fall, but we urged you not to believe them, and we were right.

Now on the Bitcoin chart, a rising wedge with bearish divergences on Stochastic and MACD has begun to form. All of this, together, with the analysis of the daily timeframe, indicates a decline. However, things can change at any time as the Bitcoin market is immature and volatile, so stay tuned to our reviews to know where Bitcoin is heading next.

The past week has become one of the busiest for Bitcoin in history. A lot of positive news for the industry came out, and a stir from ordinary people began to appear. This can be judged by the sharply increased commissions in the blockchain, which increased by 350% after the breakdown of $20,000. Now, you just can’t relax, because the coming week can also turn everything back.